Outdoor murals get some TLC

Outdoor murals get some TLC

It seems fitting that The Greatest Outdoor Show on Earth showcases some of its best art outside – for everyone to enjoy. A hazard for these outdoor exhibits; however, is the harsh Calgary weather which takes a toll on the artworks.

“The murals help to tell a story of events that have happened over the last 100 years, preserving an important part of Stampede history,” says Don Wilson, volunteer with the Stampede’s Historical committee.

The first two murals on Stampede Park were installed in 1996 on the Stampede Corral and the Big Four Building.  Since then, six more murals in various locations on Park have been added to the collection.

Special funding to mark the Stampede Centennial has enabled the Historical committee to embark on a restoration project, contracting the original artists to restore their works.

Once the restoration work has been completed, ongoing responsibility for the murals will be transferred to the Public Art committee who oversee all art on the Park.

The Early Stampede Parade mural, painted on the lower east and north walls of the Corral, was recently refurbished by Penny Corradine – the original artist.

Penny and her able assistant, husband Bill Faulkner, are excited to be part of this Centennial project, bringing the murals back to life.  Of her amazing artwork, Penny modestly says, “I just want it to be pleasing and to tell a story.”

She talked about the challenges of designing and painting the mural back in 1996.

The Corral wall is not flat and has garage doors, windows with screens and numerous pipes. Penny had to choose different scenes from the 1912 and 1919 Stampede Parades that captured significant moments, instead of one continuous Parade scene.

Each image is based on archival photographs, from Rose Wentworth driving her bit-broke buffalo team, to the trick riding cowboy sitting on his recumbent horse while holding a badger. Penny spent hours poring over photographs at the Glenbow Museum for inspiration and to find the images that would tell our unique story.

More information about the murals can be found on calgarystampede.com/art and the Public Art committee walking tour brochure. 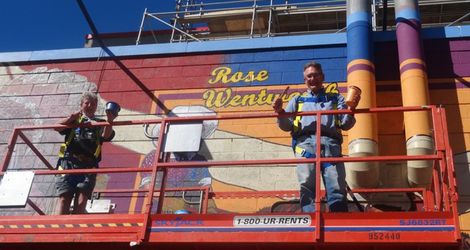