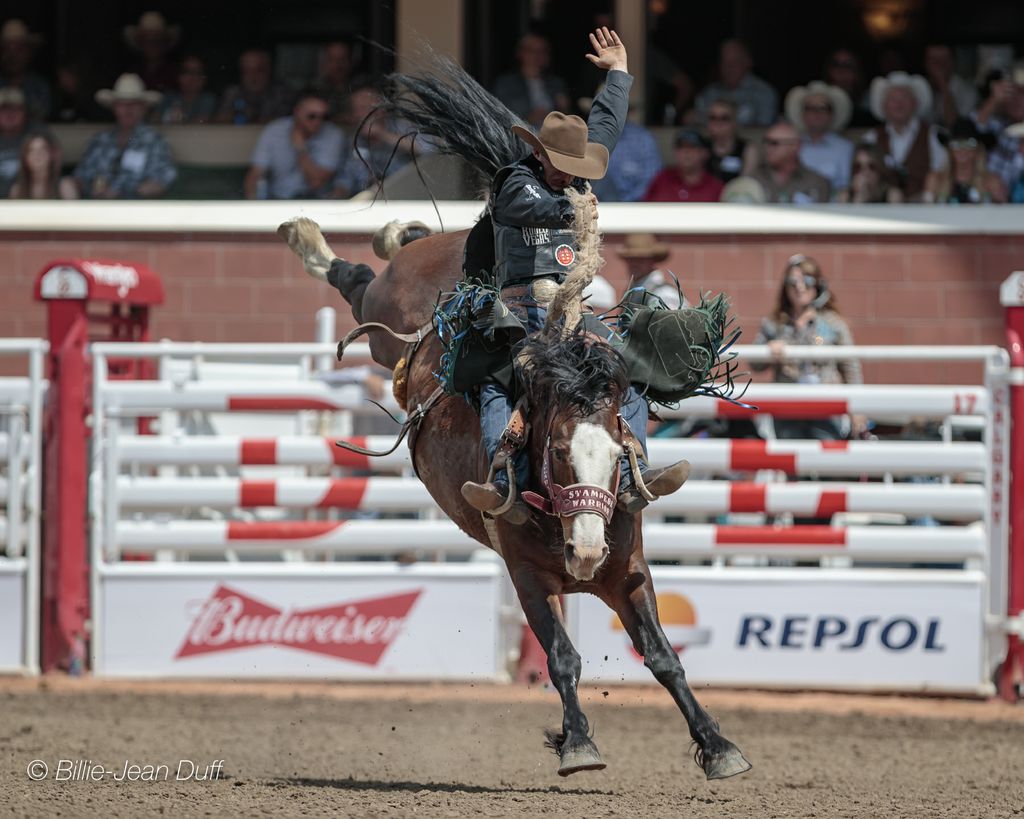 The hot July temperatures fired up a crew of past Calgary Stampede champions during the opening performance on the first day of Stampede 2018, featuring Pool A contestants. In five of the six major events, the daily bronze went to a Stampede winner. Or in the case of the saddle bronc riding, a cowboy who’s won the last three straight saddle bronc championships. Zeke Thurston of Big Valley, Alberta, picked up the first place cheque of $5500 in the round after turning in an 89 point ride on a horse called Stampede Warrior.

“You can’t ask for a horse to buck any harder or better than that one. She’s just a sweetheart. She just tries her heart out. I have a lot of respect for that horse,” credited Thurston. “She must like it here. Her name’s Stampede. She knows this is her rodeo,” he chuckled. You could say the same for Thurston.

“I don’t know,” he responds, when asked to described why Calgary has been so good for him. “Honestly, I think it’s just a lot of the stars have aligned, I guess. I don’t know what you’d say it is.”

Calgary Stampede is also a happy place for Lisa Lockhart and her buckskin horse Louis. The 2015 barrel racing champion rounded the barrel pattern in 17.360 seconds, which was fastest of the round, for $5500.

“Louis is in good shape,” agreed the busy Mom from Oelrichs, SD. “I have used another horse a lot this year. But you know, it’s just hard to not start out on such a seasoned veteran, one who has proven that he likes this arena. It puts me in my comfort zone, and so it was just a no-brainer for day number one to start out on Louis.”

“It’s great to start off with a bang and I’m so glad to be in Calgary.”

Cue another Stampede winner back for more when Louisiana steer wrestler  Tyler Waguespack was last man out and fast man in, with a 3.9 second run. He scooped up the $5500 for top spot in the Pool A standings. But Alberta cowboy Cody Cassidy wasn’t far off the pace, collecting $4500 for a four second flat time.

And the story was echoed in the tie-down roping, where 2017 Champion Cory Solomon was up to his Stampede form. The two-time winner sizzled through his run in 6.9 seconds, to tie up his first $5500 of this year’s event. But at his first Calgary Stampede, Kyle Lucas of Carstairs was on his heels, picking up $4500 for a 7.3 second run.

The only exception to past winners winning Friday was in the bull riding, where a pair of cowboys shared the high mark, each collecting a bronze and $5000.Texan Cooper Davis marked his 85.5 on Wounded Warror.

“I’ve been here to Calgary a few times, but it’s the first time I’ve ever won a round though, so I’m pretty excited,” he said. Joe Frost of Utah equaled that mark on Scorpion, getting the first Stampede go-round win of his career.