For all of his international accomplishments in the working cow horse and reined cow horse arena, the cowboy from Lacombe, Alta., had never won the crown jewel of the Stampede’s Working Cow Horse Classic, the Open Bridle category – until Sunday afternoon. 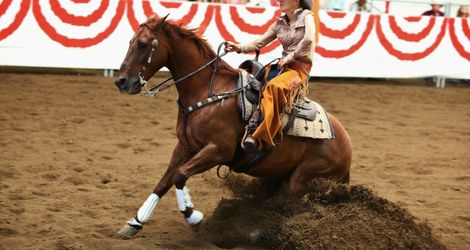 That’s because rival John Swales of Millarville, Alta., had virtually owned the trophy, with seven victories through the first 11 editions of the Working Cow Horse Classic, presented by Tesla Exploration Ltd. And heading into Sunday’s second and final round under the Big Top, three members of the Swales clan – John, brother Clint, and sister Veronica – represented five of the top seven entries in point standings after strong showings in Friday’s opener.

But Pedersen finally broke through that Swales shield, teaming up with Smart Sassy Date for a final-round 296 in the dual-judged competition, a winning aggregate score of 593.5, and a champion’s cheque for $3,375. Pedersen also collects a Stampede buckle and a limited-edition Centennial Trophy Saddle, handcrafted by renowned saddlemaker Vic Bennett Saddles of Sherwood Park, Alta.

“I finally did it. I finally beat John here at Calgary,” said Pedersen, who has been showing Smart Sassy Date, owned by Greg Gartner of Sherwood Park, Alta., for three years. “My horse was great today. He’s a Steady-Eddie horse. He’s been awesome for as long as I’ve been showing him. An extremely nice horse.”

Clint Swales, of High River, Alta., and Pure Latigo, owned by Calgary’s Bob O’Callaghan, entered the Open Bridle finale a point back of Pedersen and Smart Sassy Date, and finished two points back, with an aggregate of 591.5, after posting a 295 on Sunday. The reserve championship, worth $2,812.50, shows Clint hasn’t missed a beat since breaking his leg during a quadding accident 13 months ago and essentially writing off his entire 2011 season.

The Stampede’s Working Cow Horse Classic, presented by Tesla Exploration Ltd., represents a tip of the Smithbilt hat to the tradition and heritage of the early 18th-century Spanish vaqueros in California. Horse-and-rider teams are judged on their authority, discipline and precision in two distinct areas – reined work, or dry work, and cow work, otherwise known as fence work. Reined work, labeled “Western dressage” by some, is based on a predetermined pattern of manoeuvres, including figure-eights, straight runs, sliding stops and 360-degree spins. Cow work, the truly thrilling portion of the show, sees the horse-and-rider team first box a steer, then send it at full tilt along the fence, heading it off and turning it both ways, before finally circling it once in each direction in the centre of the arena.

This year, a total of $15,000 of added money went up for grabs, while the winners of the Open Bridle, Open Hackamore, and Non-Pro Bridle classes were also awarded those once-in-a-lifetime Centennial Trophy Saddles.

The cattle component was more of a wild card than ever during Sunday’s Open Bridle finale. Possibly due to a steady rain that began falling near the end of the round, cows dealt to the final few teams were either unresponsive or overly aggressive. Pedersen and Smart Sassy Date were issued a new cow, as were Veronica Swales of High River and Smart Like Solanos. Clint Swales and Pure Latigo had their first two rejected by the judges, but were able to capitalize on their third cow’s ferocity for a fence-work score of 150.

“The cows weren’t very nice. And that last one . . . it boxed good, but it had a ton of run. It wasn’t much weaker than the first two, just a little more respectful,” said Clint. “Pure Latigo (a nine-year-old gelding) was fantastic. I’ve had him since he was a two-year-old, and he just loves to please. He’s always the same – always tries his very best. If anything goes wrong, I can almost never blame him.”

Veronica Swales, who’s been a professional trainer for about a year now, had entered the arena with Smart Like Solanos as the first-round leader, by a slender half-point. The pair fell to fourth overall, their 290 resulting in an aggregate of 588, but Veronica still took solace with the Limited Open Bridle championship.

“I’m a little bit disappointed about how my cow work ended up. We didn’t have the best cow – it started out OK but kind of tailed off. But my horse tried hard,” said Veronica, whose mount, an 11-year-old, stud-horse stallion, is owned by Kurt and Jennifer Robson of Didsbury, Alta. “He’s a huge stopper, and he’s very nice on a cow. The harder you push him, the harder he tries for you.”

John Swales, meanwhile, had to console himself with the Open Hackamore championship on Sunday. John and Shining Peptolena, owned by Ron Stuckert and Diana Runge of Calgary, earned an eye-popping 298.5 in the second round for a 592 aggregate, good enough for a $3,690 pay day. Jesse Thomson of Longview, Alta., and Dancin Angel finished in the runner-up spot – a Sunday score of 294, an aggregate of 579, and a cheque for $2,952.

Suzon Schaal of Millarville, Alta., and her nine-year-old quarter-horse mare, Genuine Brown Gal, continued their domination of the Non-Pro Bridle class. Schaal and Genuine Brown Gal sewed up their second straight Non-Pro Bridle crown, and third in four years, on Sunday by marking a sensational 299, and combining that with Friday’s 296 for an aggregate of 595.

Since their 2011 victory at the Stampede, the duo were again in the winner’s circle at the National Reined Cow Horse Association (NRCHA) world finals in February at San Angelo, Texas – collecting an Intermediate Non-Pro Bridle crown to go with their pair of NRCHA novice non-pro titles.

“I’d say our personalities mesh very well. She’s very consistent. She’s just always there; there are no quirks about her in the show pen,” said Schaal, who earns $2,310 for her victory. “And today, she had one of the better runs she’s had . . . close to ever. Some of the cows were fairly tough today, but fortunately she got a hard-running one, and those are the ones she likes.”

Calgary’s Doreen Koroluk, aboard her own AP Docs Little Saint, scored victory in Novice Non-Pro Bridle, thanks to an aggregate score of 581.5.