CALGARY – For Charlene Gale, it’s all about show and tell. She doesn’t mind if others are showing — as long as plenty more are doing the telling.

Charlene’s father, Merv Giles, started the Circle J Ranches miniature horse program near Cochrane, Alta., in 1981. More than three decades later, Circle J has established a sterling international reputation for its crackerjack bloodlines — because in the winner’s circle, notes Charlene, the name game is everything. 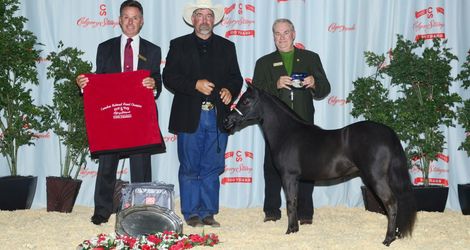 “We do show some of our horses ourselves, but not as extensively as some of the other people that have purchased them. We’re very pleased with what they’ve done with our horses — they’re our best advertising,” she says.

The regional highlight of the miniature show season, the Canadian National Miniature Horse Show, wrapped up a three-day run at the Calgary Stampede on Thursday, with nearly 90 classes held at the Northern Lights Arena and under the Big Top.

The Circle J Miniatures program has seen numerous triumphs and accolades since Merv and Claudia, Charlene’s mom, brought back a trio of miniature weanlings from a trip through the United States in the fall of 1981. One of those three, Martin’s Bunny, was the mother of three minis now owned by Calgarians Louise and Kim Locke’s Hurricane Hill Miniatures — Circle J Buster Bo, Circle J Champ’s Li’l Chief, and Circle J Bunanza — that are known informally as the Amazing Bunny Brothers and have gone on to a spectacular string of success in the show ring.

Merv, who drove a United Farmers of Alberta eight-horse hitch of miniatures for years, was involved in this year’s Stampede parade driving a four-horse hitch. Charlene and her daughter Kendra Gale now operate the breeding, training, and showing programs for Circle J Miniatures, whose herd stands at about 40 head after peaking with as many as 80 animals over the years.

“Kendra got an e-mail recently from a woman in France; a mare we had sold a long time ago has turned up in France, and is raising foals over there,” says Charlene. “And I guess there’s a stallion standing in Germany, or was until recently, that came from our place. Those are gratifying stories to hear.”

“What hooked me was driving our first team of mares. I still like driving teams best of all,” says Charlene. “And this pursuit has been great for my kids. They learned how to win and lose gracefully. They’ve talked about the horses so much that they’re entirely comfortable speaking in public. I think it’s been wonderful for them.”

About 80 miniature horses – which max out at 34 inches tall – from across Alberta and British Columbia were entered at the AMHA-sanctioned Canadian National show in an assortment of classes, including hunter/jumper, obstacle, halter, in-hand jumping, roadster, pleasure driving, log drag, and more.

While they’re small, miniature horses are surprisingly strong, a product of their traditional breeding purpose. “They were originally used to pull carts of the coal mines in England. That’s where their strength comes from. They could probably pull as much or more than a large horse, based on a factor of their own weight,” says Wally Patterson, who chairs the Stampede’s Miniature Horse committee. “Older people and kids just love ’em, because they’re so approachable. And people are usually surprised at how talented they are, and all the things they can do.”