Pulling Together: the 2014 Calgary Stampede poster

Pulling Together: the 2014 Calgary Stampede poster

The concept for the 2014 poster began with one thing in mind: the heavy horse. 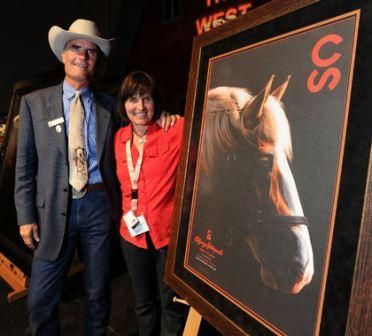 When president and chairman of the board Bob Thompson sat down with artist Adeline Halvorson he told her he wanted to pay tribute to the heavy working horse, which played an integral role in building Western Canada.

When the Calgary Stampede was founded in 1912, heavy horses could be found all over Alberta. In fact, before 1910, at least 90 per cent of public works, agriculture and resource industries relied on horse power. George Lane—one of the Big Four financial backers of the Calgary Stampede—kept 700 Percherons on his ranch, the Bar U as of 1916.

Halvorson, who grew up on a farm, has a life-long affinity for working horses. As a child, she begged her father to buy horses. “He said, ‘If they’re going to eat as much as a cow, they’re going to do their work.’ So we harnessed them up and they became both workers and companions on the farm.”

The Calgary Stampede has long honoured the legacy, power and beauty of these animals through events like Draft Horse Town, the Heavy Horse Pull and the Heavy Horse Show presented by Halliburton.

It took Halvorson four months of long hours to complete the 2014 poster. “I truly feel it’s one of my best,” she said. “It took years to learn to make my paintings look realistic. Once I got that down, I started pushing the blacks and colours to make the animals stand out even more.”

At the presentation, Bob Thompson told the crowd that the spirit of the working horse had taken on new meaning for him in the wake of the flood. “It made me think of the countless employees and volunteers who did what they had to do to make sure Stampede 101 went ahead,” Thompson said.

He named the painting “Pulling Together.”