As the Centennial year comes to an end, we have an opportunity to look back and see some of the great things our Calgary Stampede committees have achieved throughout this amazing year. The Queens' Alumni are proud of what they have accomplished this year.

The Queen’s Alumni are committed to providing opportunities and western experiences that enrich the lives of special needs children.

With support from Maxim Power, the committee hosts four Giddy Up events throughout the year.  This year, Giddy UP Aggie Days, Giddy UP Grits, Giddy UP Carnival and Giddy UP Christmas were all extremely successful events and provided exciting, active and engaging experiences for its guests.

Every year during Aggie Days in April, the committee hosts Giddy UP Aggie Days, and invites children with special needs to the event before the doors open to the public. This year, more than 50 families with participated and the kids got a chance to get up close and personal with their favourite farm animals before all the crowds.  Families also enjoyed a pancake breakfast, photos with current Stampede Royalty, and hayrides.

During the 10 days of the Calgary Stampede, the committee hosts Giddy UP Grits. This year the event saw incredible weather and the Kids’ Midway opened up early exclusively for the event. The morning activities included a traditional Stampede pancake breakfast, rides, clowns and a petting zoo.

This year was also the first year for Giddy UP Carnival. Sixty families gathered at Anderson Ranch on a lovely Fall day in October, to participate in a carnival put up especially for them. The carnival setting included horses decorated in costumes, pony rides, puppet shows, giant games and a petting zoo.  The event did not disappoint and the committee received rave reviews, saw giant smiles and heard incredible laughter throughout the afternoon.

Giddy Up Christmas in mid-November saw unprecedented registration numbers and the afternoon was filled with joy, laughter and holiday cheer.  Children were treated to an exclusive visit with Santa, and even an early Christmas gift.  Festive holiday spirit filled the Rotary House while horse drawn hayrides toured children and their families through Stampede Park.

As we reflect on our Centennial year, we see the important difference our Calgary Stampede committees make in the community. We are thankful to have groups of dedicated, creative and inspiring volunteers who help us each year to bring Giddy UP events to life. 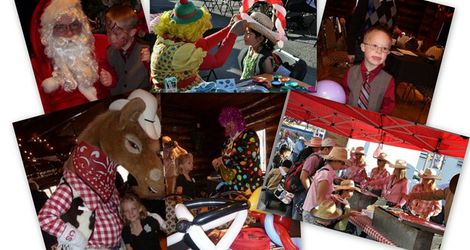