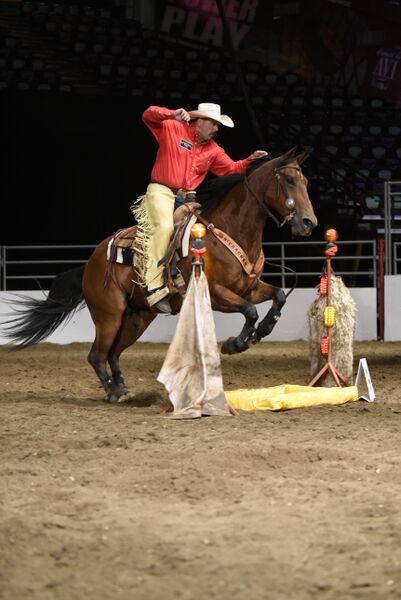 Calgary – The biggest fan of the Calgary Stampede in the entire state of Missouri might just be Extreme Cowboy Racing competitor William ‘Runt’ Rageth. In a fearless and fast assault on a very tricky Cowboy Up Challenge course, Runt and his horse Burdock bested as fine a field of Extreme Cowboy racers as you’ll find anywhere. “I love Calgary,” he grinned. “I’ll come to Calgary every time I get a chance.” The win was Rageth’s second Grand Champion performance. He won in 2011 and was Reserve in 2012.

Riders had to deal with a variety of obstacles and agility challenges including bridges, unstable platforms, water hazards and a carousel, among others. “The course was set up to be fast, but as long as you were smooth, it was a good course,” Rageth said. “Too fast was going to get you in trouble.”

Reserve Champion David Cowley, brother of last year’s winner Kateri Cowley, was less than three points in arrears after a strong ride on the same horse he took to the top of the Calgary Tower earlier in the week.

“To be with this calibre of people and come out where I did, I’m really fortunate,” Rageth said. “These guys come to whip you. Anything can happen. It can be anybody’s day at any time. This is the toughest field in the world. I’m so happy I about can’t see straight right now!”