Calgary - It was a phenomenal three-peat for Zeke Thurston in the saddle bronc riding. The Big Valley talent met up with an old friend, the Northcott Macza horse Get Smart in the Final Four.

“Every jump I thought I was going to get bucked off,” puffed Thurston, moments after a thrilling 92 point ride. “That horse bucks so hard. He’s probably only 800 pounds, but that’s one of the strongest horses I’ve ever been on.”

Thurston, who just turned 23 on Saturday, hasn’t thought too much yet about inking his place in the history books as the first saddle bronc rider to notch a hat trick with the $100,000 paydays.

“That’s crazy to me. You know, a lot of guys will go their whole careers and maybe never win this rodeo and to win it three years in a row, that’s unbelievable.”

For the second time Sage Kimzey rode out of Calgary with a giant cheque and a beautiful bronze for his efforts in the bull riding, capped off by a 91 point ride on the bull Night Moves.

“This is my third time in Calgary and to be a two-time champion already, it really is a dream come true,” smiled the three-time World Champion. “These are the ones we grow up dreaming about, getting to come here and be 91 points to win the rodeo. So it’s pretty special.”

“A hundred thousand is a lot of money for anybody, much less just a rodeo cowboy. There’s hardly ever we get to see this much money in one place. It’ll definitely start paying for the ranch I’ve always dreamed of.”

Adding to the bull riding saga was the fact Idaho’s Garrett Smith made a grand ride himself on Compton Bound. He was 90.5, just a half point behind Kimzey. But he’ll take home $25,000 as a consolation prize. Both Jess Lockwood and Joao Ricardo Vieira bucked off their bulls.

“This is unreal,” bubbled the Texas cowboy. “That’s a horse I’ve always wanted. You think about getting on the best bucking horses in the world and then you imagine them somewhere at a place like this, but that’s just usually something you see before you go to bed at night. To have it really happen is just unreal.”

Champion’s Stampede cheque total $114,833, including his earlier winnings. Taking the runner-up bonus of $25,000 was Stampede newcomer Mason Clements of Utah, who was 89.5 on Special Delivery. Manitoba’s Orin Larsen will get $15,000 after a rough go on Spilled Perfume for 70.5 points, while Jake Vold takes home $10,000 despite being bucked off by Shadow Warrior in the Final Four.

Louisiana’s Tyler Waguespack only took two years in Calgary to make his way to the big stage for a steer wrestling bronze. He got his steer over in 3.8 seconds to be fastest in the Final Four round, and $100,000 richer.

“This is incredible,” confirmed Waguespack. “Last year I lucked up and got to come to this rodeo on an invite. This year, I qualified in. I won second last year, first this year.”

“I’m at a loss for words right now,” he added. “I’ve never won a cheque this big. I always said I wanted one of the big, pretty, Calgary bronzes so I finally got that, and the cheque’s awesome too.”

“I just bought a house down home, so a lot of it’s going to go into that.”

It was during the barrel racing that the once sunny skies opened up and added some theatrics to the day. But that didn’t deter Showmance from doing his job. Tiany Schuster hung on for the ride, and their time of 17.032 seconds was best of the bunch, to give her a big Stampede victory.

“I’m just shaking all over. I’m just at a loss for words and I’m normally not. I’ve never won a major event, never, never, ever.”

“The thing about Showmance and the thing about (my boyfriend) Edwin is they’re always there for me, and I know I can always count on them.”

Cory Solomon knew the path to the Calgary Stampede stage, and while it’s taken him five years, he made that walk again. All it took was 6.7 seconds – the time he posted in the tie-down roping Final Four round which no one could match.

“I just wanted to get a good start, and get my rope around the calf,” said Solomon, who credits mental preparation for his success, along with his good rope horse Twinkie.

“I did it in 2012, and I thought ‘it doesn’t get much better than this’. I came back here in the Finals a couple of times, and came up short. To do it again is like a dream come true.”

“I love this rodeo, and it’s been great to me.” 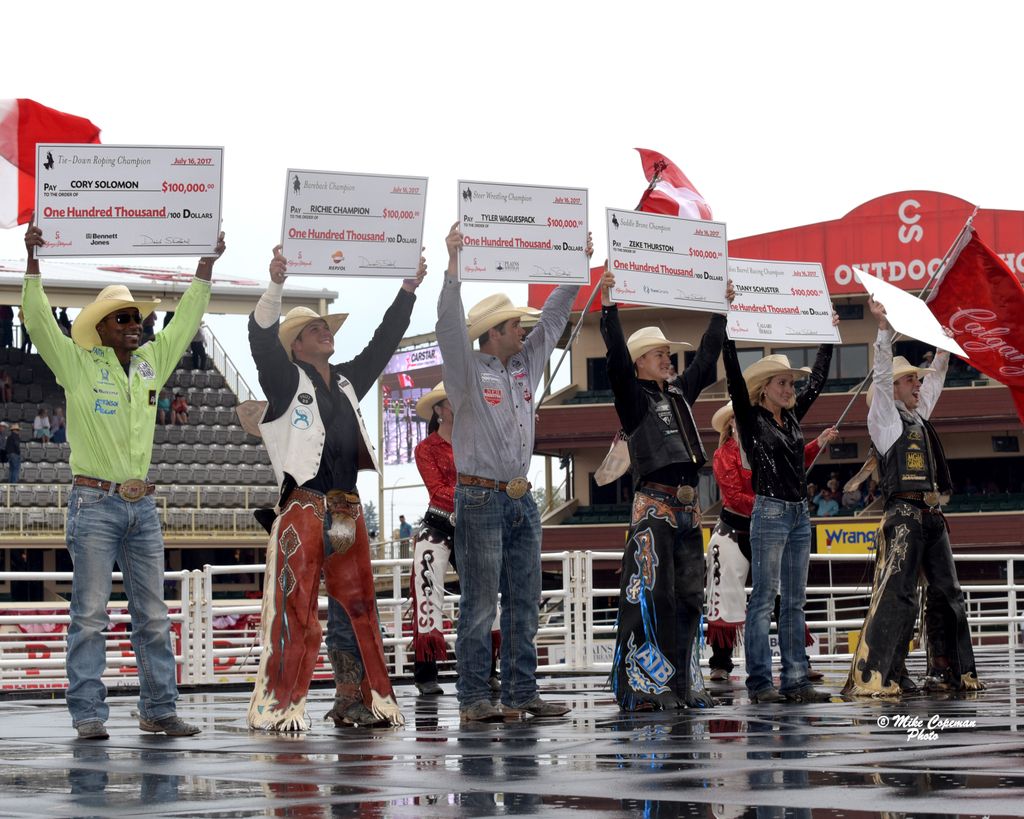