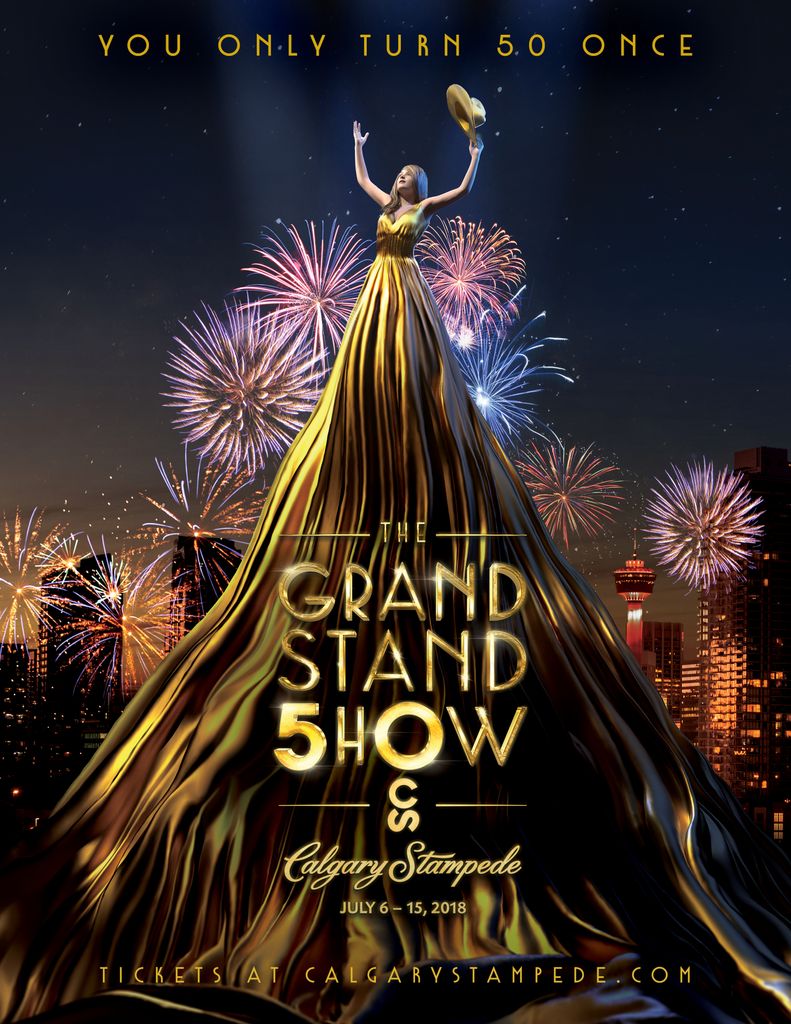 Calgary – The Calgary Stampede is thrilled to present ‘The Grandstand Show: 50’, celebrating 50 years of Calgary’s iconic show. For the past 50 years, the Stampede’s Grandstand Show has amazed more than 5 million spectators from around the world and this year is the pinnacle of 50 years of hard work, dedication and creative performances.

Audiences will experience a made-in-Calgary; world-class show that highlights some of Calgary’s most iconic moments. The show will take audiences on an awe-inspiring journey through spectacular and heartwarming pieces that will leave guests feeling an incredible warmth and pride for our community - Calgary.

Once again, Dave Pierce leads the Grandstand Show as creative director, with a hand-picked team of designers and artists from Calgary and across the globe.

"This year's show celebrates 50 years, so building new ways for our creative ideas to come to life on such a massive outdoor stage has been extremely rewarding,” says Pierce, whose creative projects have won Emmy and Grammy awards, including Pierce's own Emmy for outstanding music direction for the 2010 Olympic ceremonies. “It's like being an artist with a 200 foot canvas and 70 minutes to create a painting that is entertaining, heartwarming, thrilling, exciting and funny...except we get to create it in front of 18,000 fans each and every night of Stampede."

‘The Grandstand Show: 50’ will showcase all the elements that have contributed to making this an iconic show for the Calgary Stampede and for the city.  Including hallmarks of what makes the Calgary Stampede The Greatest Outdoor Show on Earth with performances from The Young Canadians, world class acrobats, extreme athletes, music performances and so much more, all culminating in a spectacular nightly fireworks finale.

Be among the first to experience the all-new 2018 Grandstand Show with 40 per cent off tickets to the opening night performance on Friday, July 6. This offer is valid from Thursday, April 19 at 10 a.m. until Saturday, April 21 at 10 a.m. Use promo code: REVEAL https://stmpe.de/2HuJ4x5.

The Calgary Stampede is from July 6 – 15.  Tickets can be purchased online at calgarystampede.com/stampede/tickets/evening-show or via phone through the Stampede ticket office at 1.800.661.1767. Evening Show Tickets start at $49 and include the Grandstand Show, GMC Rangeland Derby, and admission to Stampede Park.