Restoration of the eight murals at Stampede Park, depicting icons and moments of significance from the Stampede’s history, has recently wrapped up, with seven of the restored murals now on display and the final one ready to be installed in May. 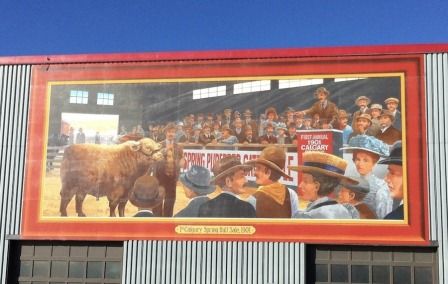 “The murals tell important stories about historical events that have occurred at Stampede Park,” says Don Wilson, the volunteer project manager of the restoration process. “Each one represents and celebrates a key moment in the history of the Stampede.”

Originally painted in the 1990s, time and weather had badly faded the original murals. The Stampede’s Historical committee decided full-scale restoration was in order.

“The timing for mural restoration was important because it aligned nicely with the Centennial, and became a legacy project. Secondly, we were able to re-hire all of the original artists, who were all willing and able to re-do their own paintings. That in itself was a unique feature of the restoration project.”

As with all major undertakings, restoring eight enormous paintings was not without complications.

“Three of the original murals had been painted on plywood, and when it came time to restore these three paintings, we learned the sub-structures they were painted onto were rotting,” explains Don. “We needed to completely re-paint those murals onto different foundations.”

Replicas of the deteriorating murals were re-painted onto metal-wrapped panels that have a life expectancy of 30 years or more. Each panel is about four feet high and eight feet wide, and each was painted individually, before being assembled together like a giant jigsaw puzzle. The artists worked at Stampede at the Old Stores building on huge 8’x16’ “easels”, providing a well-lit space out of the elements.

Each mural took around six weeks to restore, with the project starting in June 2012.

“Because the artists were able to re-paint their own original paintings, they were also able to add in new detail here and there that enhanced the murals,” says Don.

The Bull Sale mural, now located on the east side of the Agricultural Building, tells the story of the first purebred livestock sale that happened in Calgary during the spring of 1901. The Stampede’s archivist provided artist Keith Holmes with photographs and descriptions of a number of key figures who may have been present at the sale, and Keith incorporated their likenesses into the restored version of his original painting.

“Having this added detail in The Bull Sale mural is a real nod to the history and development of our province and to the Stampede in general,” Don says. “There are a lot of meaningful pieces of the Stampede’s history that are celebrated within all of these paintings.”

Support from Canadian Heritage, Building Communities Through  Arts and Heritage, Legacy Fund, enabled all of the murals to be restored within the year and the development of an on-line walking tour.

The eight murals are included in the Stampede Art Walk, a self-guided tour around Stampede Park that showcases 15 key pieces of public art.