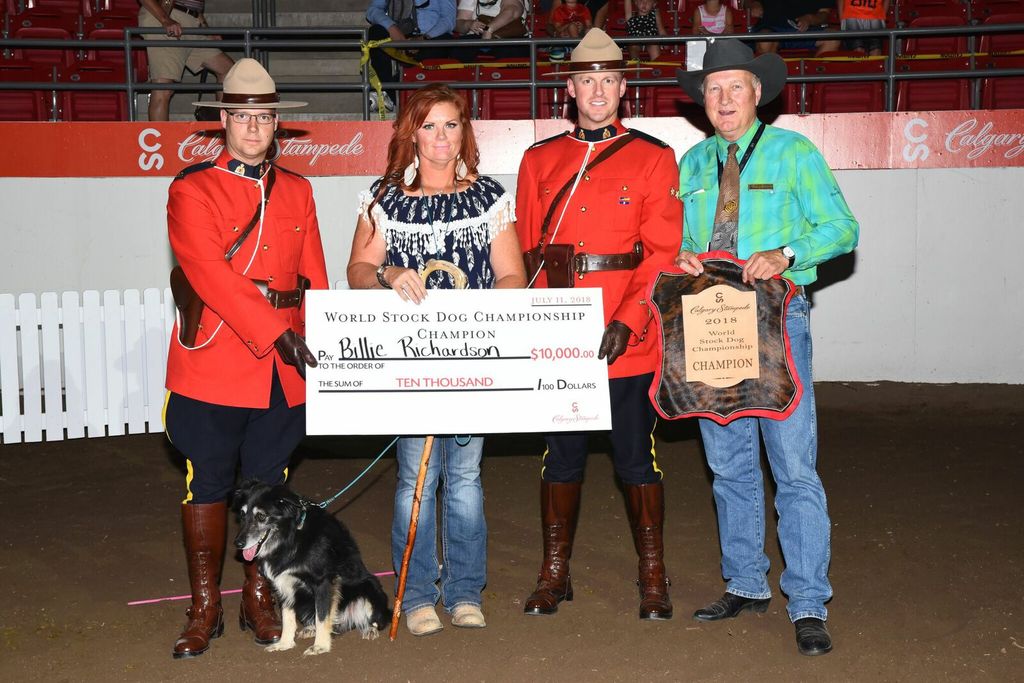 CALGARY —The firsts keep on coming for Okotoks’ Billie Richardson and her Australian shepherd Dan.

In 2015, Dan was the first non-border collie to make it to the finals of the World Stock Dog Championship at the Calgary Stampede. In 2017, Richardson and Dan made it to the top 12 again. On Wednesday, they raced to the top spot in the event, making Dan the first Australian shepherd to earn the title in the event’s 22-year history.

“He is the first dog I ever trained. I got him as a pup. I had another dog and I went to a fun trial. I saw this lady with an Australian shepherd do some great things,” Richardson said shortly after her win at the Nutrien Western Event Centre. “I said, ‘Someday I’m going to have a dog like that,’ and now I’ve got a dog like that!”

Richardson, a semi-retired mechanical engineering consultant, took home $10,000, a commemorative bronze and a custom crook for a posted time of 1:37. She also received the Sponsor’s Choice Award, and its accompanying a Bar T5 Stock Trailer.

“Once you get into the finals, it changes you. I won Clock Stock and Barrel this year and it takes you to a different level,” Richardson says. “When that pressure was on, I just got really calm, really focused. I just knew it was going to work out.”

Handlers came from as far away as Florida to take part in the United States Border Collie Handlers Association and Alberta Stock Dog Association sanctioned event. Sixty handler-and-dog teams competed over two aggregate rounds on Tuesday and Wednesday, vying for one of 12 spots in the sudden-death final. Handlers unleashed a symphony of whistle and voice commands as they directed their keenly focused dogs in herding three sheep through a challenging 21-point final course in under four minutes.

Bob Allen and his border collie Joey, who made the trek to Calgary from Gower, Mo., earned the Reserve Champion title (along with a $4,000 cheque and a custom crook) for their time of 1:56. The top 12 included veteran handlers and previous Champions and Reserve Champions.

Richardson lauded the competition and camaraderie among the handlers at the event. “Mentorship is everything in this sport. It gets us to the next level.” She plays her part in that cycle, holding clinics on her YKnott Ranch and even overseas, as she did in Sweden in May. Fellow competitor Karen Ramstead has also benefitted from the ongoing mentorship in the community.

Ramstead got into the sport as she was transitioning from a career in sled dog racing. She was the first Canadian woman to enter and finish the gruelling Iditarod, an unforgiving race that covers 1,600 kilometres of rugged Alaska terrain in the dead of winter. She entered the race 11 times, and finished five times.

Lisa Wright, one of Ramstead’s neighbours in Perryvale, Alta., breeds and trains border collies. She got Ramstead a dog from Scott and Jenny Glen — Richardson’s mentor. Two-year-old Bet was a “flunk out” with “absolutely no instinct to herd,” Ramstead recalled, but the dog was great at free running alongside her Siberian husky pups at her business, North Wapiti Kennels. Six years later, however, Bet took a sudden interest in sheep.

“We were over at Lisa’s and Bet tippy-toed around the sheep with one of her dogs. It was like watching a switch go on. By the time I left that day, she was in and around the pen working sheep,” said Ramstead, 54. “Now I can’t bring her to trials. She is so excited by sheep, she vibrates so hard if she’s around them. She decided this was how she was going to deal with her mid-life crisis.”

Bet’s herding instinct ignition couldn’t have come at a better time. Moving on from sled dog racing was proving tough for Ramstead, who bred and ran sled dogs full time since 1999.

“Sledding had been my way of life and my job. By my own choosing, that ended and it was hard,” she said. “But with Bet, all of a sudden I have something else with a dog. Watching a dog work off its instincts is what I like about it. It’s just like with sledding: you don’t have to coax a dog to run in harness, it’s so entrenched in their souls.”

This marks the third time she’s competed in the World Stock Dog Championship at the Stampede (she and her dog Zac didn’t make the finals), but her relationship with the Greatest Outdoor Show on Earth stretches back much further. A former Calgarian, Ramstead’s first job as a teen was seating people at the Grandstand. When she was older, she worked with Lammle’s Western Wear & Tack as a store manager and buyer.

The stock dog community has welcomed her with open arms and supported her growth in the sport, she said. She’s also enjoying a decidedly less dangerous sport than mushing: Ramstead has a piece of black spruce embedded in her left hand, a physical reminder of one of those Iditarod races.

“Sheep can be mean, though, I have discovered that,” Ramstead said with a laugh, “but the risk of frost bite is definitely lower in this sport.”