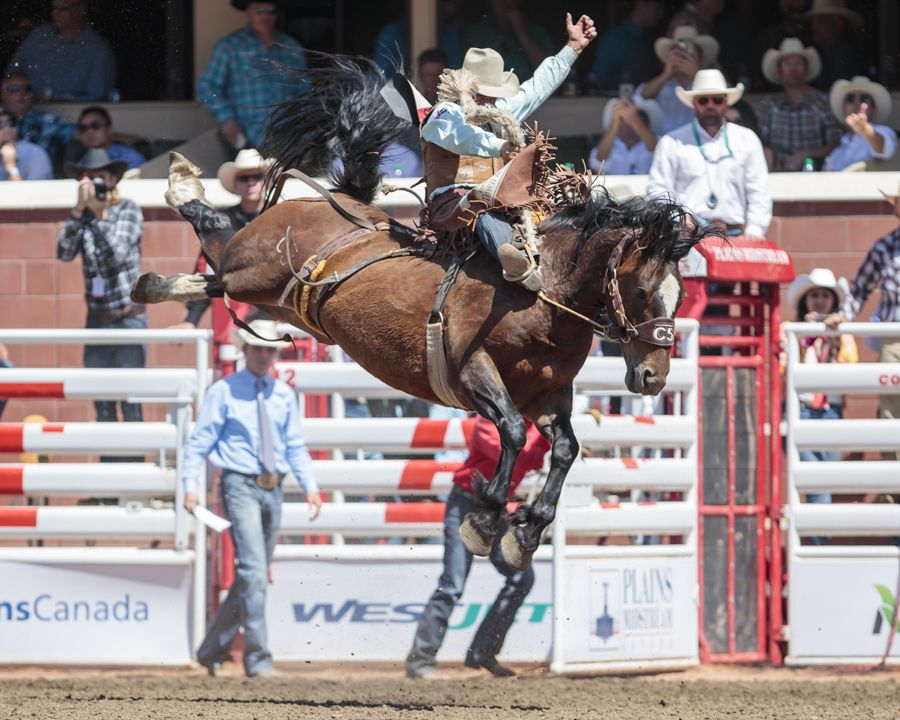 They were doubling down on Day 4 of the Calgary Stampede, as Pool A came to a close. Monday was the last chance for contestants to punch a ticket straight through to Showdown Sunday. Cody DeMoss did it in the saddle bronc riding by repeating what he managed to do on Day 3 – win the round. This time it came courtesy an 89 point ride on a horse called Curly Bill.

“Outstanding animal,” declared DeMoss, from Louisiana. “He really had a good day with me. You know, when a feller gets tapped off on a bucker, that’s the funnest thing to do. That was one of them right there. That’s why we ride bucking horses, to get on like that and to ride like that”.

By claiming back to back go-rounds, DeMoss shot his earnings up to $11,000, which was enough to nail down the last of the four spots available getting him right through to Sunday’s action. Clay Elliott finished high man in Pool A by placing in each of the four rounds, so the Nanton cowboy picks up $14,000. Three-time Stampede winner Zeke Thurston was second Monday and finished second in the pool, with $13,500, followed by Isaac Diaz with $11,500.

Kelly Bruner also doubled up on her bronze collection, when she and her guy Suzy set a new fast barrel racing time for the Stampede at 17.17 seconds.

“It’s great to be a repeat,” Bruner said. “My horse ran really hard. I got a better third – my third barrel was kind of a loop yesterday, and today, I set him up for it better, and boy, I mean I skinned it. It was very close to going over.” Bruner cruised to the top of the Pool A barrel racing standings with her $19,000 total. Also qualifying from the first four days of competition were Ivy Conrado ($17,0000); Lisa Lockhart ($12,000); and Carmel Wright ($8,500).

Still on the double-train, Kyle Irwin also made it two-for-two in the steer wrestling when he tipped over his steer in just 3.8 seconds, for his second straight go-round bronze.

“Yesterday was good, and then today I knew I had a chance, but you’ve still got to do it. I’m looking forward to Sunday,” said Irwin. “That’s the ticket now, is to get to the Final Four, and then you win good money out of here.”  Irwin makes Sunday’s cut directly with his $11,000 Stampede haul, just behind defending Stampede Champion Tyler Waguespack with his $11,500. Cody Cassidy makes the cut as he finished with $9500, and then Cole Edge of Oklahoma joins the crew with $7750.

There was also a new fast time set in the tie-down roping, when Caleb Smidt came out and laid down a run in just 6.7 seconds.

“Everything has to go really smooth, and go really fast,” noted the Texas cowboy. “I actually ran the calf a little further than I wanted to, but he was fast handling and made a good run. I didn’t think I was that fast but whatever the clock says.” The $5500 bonus made Smidt’s Stampede account look even better, at $13,500 and guaranteeing him a spot at Sunday’s Finals. Topping Pool A was fellow Texan Cory Solomon, who placed on each of the four days, giving him a tally of $15,000. Cade Swor also makes it through to Sunday with $11,000 and joining them will be Kyle Lucas of Carstairs with $8,500.

There were four bull riders who made the whistle in the round, but the best of the bunch was from Joe Frost on the C5 bull Big Dip, for 87.5 points. The extra $5500 gave him the frontrunner spot in Pool A with $15,000. Cooper Davis of Texas finished second overall with $10,000; followed by Brazilian Fabiano Vieira at $8000; and Ty Wallace with $7500.

Day five will bring a whole new set of competitors to town, for their four chances at qualifying directly for the final Sunday drama.