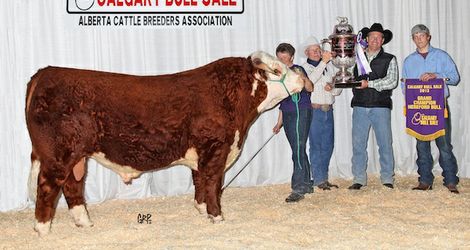 This year’s Calgary Bull Sale, the oldest continuous consignment bull sale on the planet, rang up total sales of $1,004,850, and with 181 bulls sold in all, the average price was $4,675.41. Those figures may not match the extraordinary totals from the 2012 Calgary Bull Sale — $1.38 million and $5,727, respectively — but this year’s average bull price was still the second-highest of the new millennium, behind last spring’s edition.

The Calgary Bull Sale, boasting world-renowned genetics, is a benchmark for the Canadian cattle industry, and sets the bar for the remainder of the bull-buying season. Unsurpassed in reputation and longevity, the Calgary Bull Sale sees consignors offer top bulls from the Hereford and Angus breeds to commercial ranchers and fellow purebred producers from across North America.

This year’s sales total included 15 pens of five heifers as part of the second Commercial Replacement Heifer Pen Show and Sale, sponsored by Pfizer Animal Health, which sold for $82,750. It also included the sale of 12 ranch horses for $75,850.

The top-selling animal at the 113th annual Calgary Bull Sale was a Hereford from consignor Little Poplar Grove Herefords of Forestburg, Alta., purchased for $35,000 by Crone Hereford of Hardisty, Alta. The top-selling Angus, from consignor Scott Stock Farm Ltd, of Crossfield, Alta., was bought for $7,500 by Perry Farms of Calgary.

The top volume buyers were Miller Ranches Ltd. of Hanceville, B.C., Guenthner Ranch of Consort, Alta., the Pipeline Grazing Co-op of Medicine Hat, and the Vegreville Colony of Vegreville, Alta.