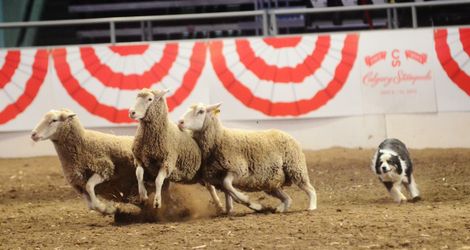 Zip is the daughter of Tex, with whom Montgomery won his 2006 and 2008 Calgary crowns, and the granddaughter of Gyp, Montgomery’s companion for victories in 1999, 2000, and 2003. Ben also joined Montgomery in the Stampede winner’s circle last year.

“Well, the money is a big deal, of course,” laughed Montgomery, who collects another $10,000 at North America’s richest indoor stock dog trial. “But every year, it’s a very tough, high-intensity competition. It sure gets your adrenaline going.”

This year’s World Stock Dog Championship, presented by Sasol Canada, began with 60 handler-and-canine teams on Sunday morning, with two rounds of preliminaries reducing the field to a 12-team final on Monday night. Out on the Saddledome infield, dogs had a maximum of four minutes to guide three sheep around a demanding obstacle course of barrels, through a chute, and into the pen.

Louanne Twa of Okotoks, Alta., had laid down a serious and immediate challenge with Meg, her five-year-old canine. As the second team of 12 to enter the Saddledome arena, the pair had coaxed their ovine adversaries through the chute at the 1:15 mark, and stopped the clock in 1:53.

Montgomery and Zip, though, answered with an interval time of 1:21, and 20 seconds later Montgomery was well on his way to back-to-back Calgary glory, and career Stampede crown No. 7.

“Zip handles stock very well. She has a feel for them,” said Montgomery, who’ll also be taking home a Limited Edition Calgary Stampede Centennial Commemorative Pendleton Wool Blanket for his win. “It’s kind of hard to explain, but she knows how much pressure to put on them, when to push, when to back off. She really feels her stock well.”

Twa, who had made the semifinal round of last fall’s United States Border Collie Handlers Association (USBCHA) national finals at Carbondale, Colo., with Meg, collects $4,000 for her troubles.

“Our time could have stood up, I suppose. But it was pretty stressful just watching the rest of the teams go out there, because a lot of them were capable of beating our time – Dale definitely being one of them,” said Twa, who’s now advanced to the final of the World Stock Dog Championship, presented by Sasol Canada, for four straight years.

Randy Dye of Bowden, Alta., and Sweep finished third in a time of 2:03, while Campbell Forsyth of Eriksdale, Man., and Isla placed fourth in 2:14.

As always, there were a handful of what-if scenarios. Diana Gauthier of Lumby, B.C., the Stampede’s 2007 champion, and her dog Keen Eye Skor had the best chute time (1:10) of the night, but finished seventh overall. Pam Boring of Pink Mountain, B.C., the 2009 titleist, and her companion Ben ran up against a terribly confrontational ewe that would barely give an inch. And 2010 champs Dave Claypool of Cranbrook, B.C., and Glen had all three sheep at the leading edge of the pen at the 1:46 mark, but couldn’t close the deal and eventually took a no-time.

In all, five former Stampede champions competed in Monday’s final.

Thad Buckler of Evansburg, Alta., who finished fifth with Trax in a time of 2:20, won the World Stock Dog Championship’s aggregate award, having entered Monday’s final with the best total time over the two preliminary rounds.