CALGARY – Over the years, the Calgary Stampede has been something of a security blanket to Pam Barker. And with Guy Weadick’s romping rangeland rumpus about to celebrate an important birthday, she decided it was high time to reciprocate. 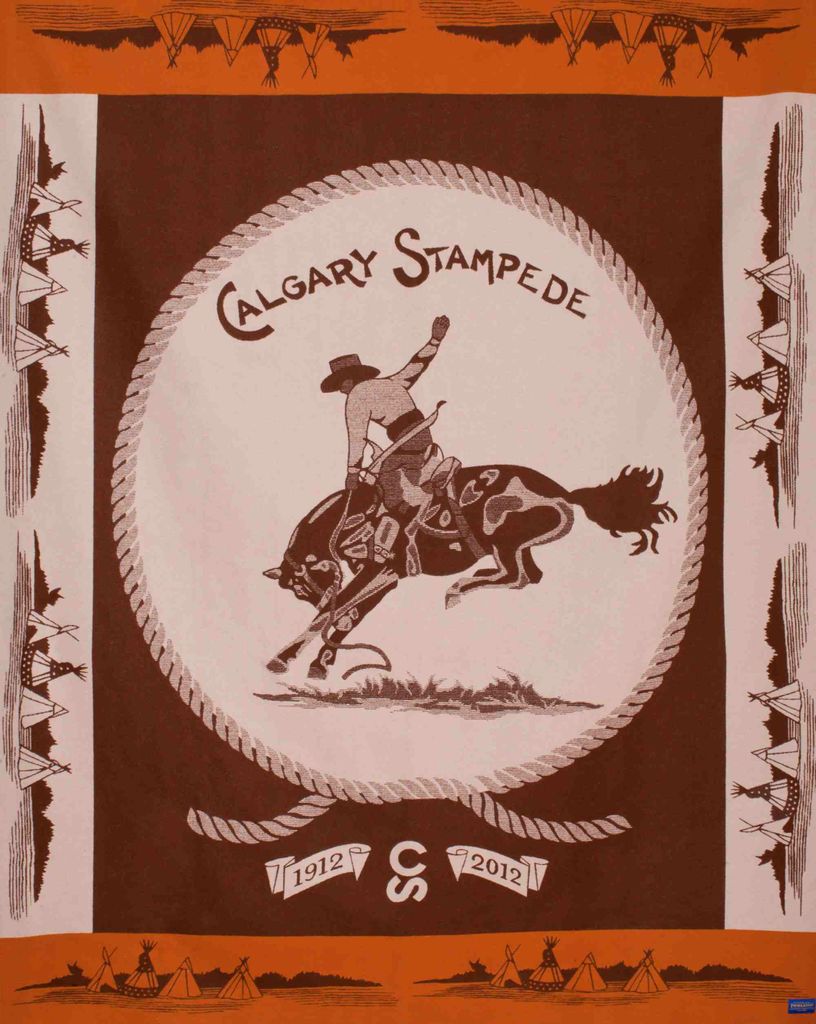 The Calgary Stampede’s Sheep Committee has commissioned 100 Limited Edition Calgary Stampede Centennial Commemorative Pendleton Wool Blankets — with Barker, a past chair and second-generation member of the Stampede’s Sheep Committee, co-ordinating the project. While most of the keepsake Centennial Blankets were quickly purchased earlier this year, about 20 of these collector’s items were held back, and will be presented on a daily basis during the 2012 Stampede, from July 6 through 15.

“I’m a Stampede kid. My dad Don showed sheep, and our whole family showed 4-H steers at the Stampede. I first volunteered to announce at the Wool is Wonderful display in 1973, and I’ve since announced shearing competitions and promoted the Stampede at state fairs and stock shows across the United States,” says Barker. “The Stampede has had a huge influence on my life, and not just for those 10 days a year. To be able to participate in a project that has touched so many people, and will leave such a wonderful legacy . . . it means a lot to me.”

The 80-inch-by-64-inch blankets, made of the finest Merino wool, were produced by the renowned Pendleton Woolen Mills of Pendleton, Ore. The design is based on a souvenir silk scarf produced for the 1912 Calgary Stampede and rediscovered by Victoria Austin of the Calgary Stampede Store, with the ivory, orange, and rust colour scheme reminiscent of early Stampede posters. The 100 Centennial Blankets commissioned by the Sheep Committee also sport a special commemorative leather label that notes how wool blankets have played an essential role in our Western heritage since the days of the early traders, and that “mankind’s history has been woven in wool for 10,000 years.”

Daily special presentations of the Centennial Blankets will begin on Friday, July 6, the first day of the North American Sheep Shearing Challenge in the Agriculture Building, when the Calgary Stampede’s Next Generation Committee receives a blanket that will find its way into the Centennial Time Capsule. Centennial Blankets will also be awarded to the Open, Intermediate, and International Team Challenge champions at the North American Sheep Shearing Challenge, following the 5 p.m. finals on Saturday, July 7 in the Agriculture Building. Ditto for the winners of the World Stock Dog Championship, presented by Sasol Canada, at the Scotiabank Saddledome — including the victors of the first two preliminary rounds as well as the overall champion, who’ll be crowned following the 7 p.m. final round on Monday, July 9.

The Centennial Blankets will also be bestowed on various other recipients at the Sheep Showcase Stage in the Agriculture Building, at 6 p.m. daily, from Tuesday, July 10 through Sunday, July 15. Those recipients include honourees, sponsors, the Stampede Archives, the Canadian Agriculture Hall of Fame, and special exhibitors — such as 95-year-old Chester Fowler of Airdrie, Alta., who showed sheep at the Stampede for parts of eight decades, from 1935 through 2004

It’s all a part of the Sheep Committee’s tribute to sheep producers, who’ve been an integral part of the Stampede’s fabric dating back to its formative years — and even before that. Barker notes that the earliest confirmed date of a sheep show in Calgary was in 1901 during the Inter-Western Pacific Exposition Co. Ltd. — predating both the Stampede and the Calgary Industrial Exhibition, which later merged.

“There were sheep shows in Calgary prior to the Stampede. There were all kinds of other wool-related classes in those early days — knitting, weaving, darning of socks,” she says. “And there were wool shows, too, with judging of the fleeces. Sheep have been around Calgary’s agricultural exhibitions since the very beginning, just as cattle and horses were.”

The Stampede’s Sheep Committee will be launching another special project, called Together We Weave, during the Sheep Showcase from July 10 through 15. Stampede visitors are invited to add a strand of wool to a unique Woven Together blanket being assembled on a loom in the Agriculture Building; following the Stampede, they can bid online to purchase this piece of Stampede history.

Proceeds of the sale of the Centennial Blankets will go toward the creation of permanent bronze trophies that’ll be presented every year to the winners of the North American Sheep Shearing Challenge and the World Stock Dog Championship, presented by Sasol Canada.

While the original batch of Centennial Blankets has been sold out, the Calgary Stampede Store is offering a retail version of the blanket for purchase.