CALGARY – As part of the Calgary Stampede’s Centennial celebrations, the 2012 Sheep Showcase will be tipping its hat to history.

It’s a history that will be surprising to most — because wool was very much a part of the old West. 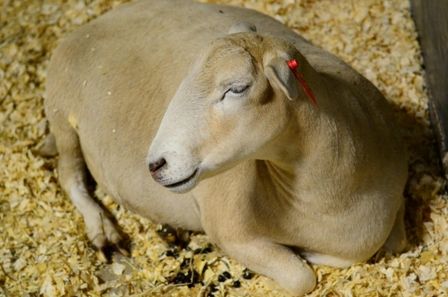 “A lot of the early ranchers in Alberta had large flocks, going back to the 1880s — we’re talking about flocks of 10,000 to 12,000 sheep,” notes Alan Breakey, the chair of the Stampede’s Sheep committee and co-ordinator of the Sheep Showcase. “All the big ranchers like the Burns and the Cross families had sheep. From the settler level to the large ranch level, sheep were very definitely an integral part of the whole livestock scene.

“Sheep were one of the foundations of ranching and agriculture in Alberta, right out of the chute,” he adds. “I suppose the perplexing or unanswerable part is why sheep took second place to cattle in this region through the 20th century . . . although the introduction of synthetics to replace wool through the 1920s and ’30s, worldwide, had as much to do with it as anything else.”

These days, however, the sheep industry — in Alberta, in Canada — is experiencing a steady revival, and that’s a trend upon which the Sheep Showcase continues to capitalize. Now in its third season of existence, the Sheep Showcase — a collaboration between the Stampede, the Alberta Lamb Producers, the Alberta Sheep Breeders’ Association (ASBA), and the Alberta Livestock and Meat Agency (ALMA) — will be seeking out a potential audience with two distinct approaches.

An exhibit in the Agrium Ag-tivity in the City Discovery Centre will cater to consumers, international visitors, and potential sheep ranchers, right from Sneak-a-Peek night on Thursday, July 5 through Sunday, July 15. The Ag-tivity in the City exhibit, open daily from 10 a.m. to 9 p.m., will focus on the culinary aspect in a bistro/deli setting (providing information on locally produced lamb and recipes to send via e-mail), as well as the ranching angle (with discussion of management, husbandry, and best-care practices) with a pen of live sheep and video displays. Meanwhile, a more industry-facing exhibition will take over a corner of the Agriculture Building from Tuesday, July 10 through Sunday, July 15.

Well over half of the Canadian market is still supplied by foreign lamb producers, but the domestic industry continues to fill that niche with slow, steady growth. The Canadian sheep herd grew by two per cent in 2011, to about 830,000 head, while Alberta’s herd grew by about the same rate, with about 136,000 animals now in Wild Rose Country. The number of replacement lambs grew at a higher rate in 2011 — five per cent in Canada, 4.5 per cent in Alberta — and the increase in replacement stock reflects a trend toward increasing overall productive capacity, says Breakey.

Why? The answers can be found both on the rack and on the plate. The wool industry continues to make a steady revival in the area of apparel, particularly the outdoor clothing industry, because it provides perfect body climate control, it dries quickly, it retains its heat even when wet, and it has fire-retardant properties.

As far as appetites go, the national palate continues to change because of the number of new Canadians who are entirely familiar with lamb and mutton as a staple of their diet. “The demand continues to grow in the consumer market, partially because of the ethnic diversification in Calgary, in Alberta, right across Canada. For various reasons, in many cultures lamb and mutton have traditionally been the primary source of protein,” notes Breakey.

“There are a lot of cattle people who are interested in incorporating sheep into their operations as a diversification. The whole economic stream of sheep versus cattle . . . the turnaround time in the sheep process is far quicker than cattle,” he adds. “Sheep tend to have twins and triplets; they go to market within four to six months. The numbers game with sheep is different, and in some ways better, than with cattle. Using both of those economic models, ranchers are finding it’s a good blend for their operation — a worthwhile diversification.”

The industry-focused exhibit in the Agriculture Building, open from 11 a.m. to 8 p.m. starting Tuesday, July 10, is expected to draw regional sheep ranchers with numerous breeds — North Country Cheviots, Suffolks, Texels, Dorpers, Southdowns, Katahdins, and more — in tow. Globally, the sheep industry is worth billions — the value of the Australian sheepmeat industry alone, for example, is $4.1B annually — and various retail displays and industry booths will illustrate the striking versatility of sheep, as well as the myriad products available beyond wool and meat. There’ll also be regular shearing demonstrations — and, in honour of the Stampede’s Centennial festivities, a strong historical component, with carders, spinners, and knitters demonstrating the sheep-to-shawl process, as well as an exhibition of archival photographs and sheep-related antiques. The Sheep Committee will also be making special presentations of the Limited Edition Calgary Stampede Centennial Commemorative Pendleton Wool Blanket, produced as a salute to Stampede Agriculture, throughout the 10 days of Stampede. The Sheep Showcase will also have its turn in the spotlight at Agriculture 100 on Tuesday, July 10 in the Victoria Pavilion.