CALGARY – The Calgary Stampede held its annual Quality Beef Competition last week. And it’s not much of a stretch to say that the world was watching.

The Stampede’s Quality Beef Competition, featuring entries from the annual UFA Steer Classic, is staged each year following The Greatest Outdoor Show on Earth as a means of identifying carcasses of superior quality, and encouraging ranchers to meet the latest in consumer demands. Beef industry eyes from all over the globe keenly await the results, with domestic and overseas ranchers alike seeking the appropriate breed of cattle to use in their genetics programs back home. 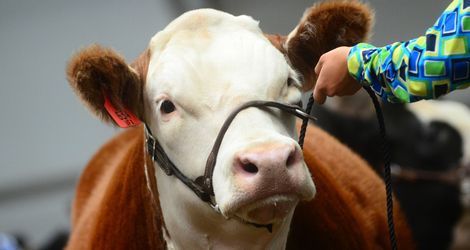 “From the (16th) World Hereford Congress (held this month in southern Alberta, during and following Stampede), I’d say 80 per cent of the people involved were at this year’s competition. It sets the standard. Huge international interest. Huge interest domestically. We have people looking to buy embryos all the time. It’s the best way of moving genetics internationally, or even just around the country, disease-free.”

This year’s winner of the Stampede’s Quality Beef Competition, held on July 16 at Cargill Foods in High River, Alta., was a Shorthorn steer owned by Ryan Gilchrist of Bluffton, Alta., with AAA 90 marbling, a rib eye of 90 square centimetres, a Sterling Silver score of 82, and a carcass weight of 743.2 pounds. Gilchrist pockets a grand-champion cheque for $3,000, plus the value of the carcass. “You don’t think there are people marketing purebred cattle at the Canadian Shorthorn Association who are already saying, ‘A Shorthorn steer won this year. This is what our breed can do for you’?” notes Miller. “The Speckle Park breed had won the Quality Beef Competition for the past two years, and the breed has really been riding high based on that success. It’s multiplied sales of Speckle Park embryos and semen that Australia is directly importing . . . we have a huge business of exporting this breed to Australia and New Zealand.”

The reserve champion, or runner-up, was an animal from the UFA Steer Classic’s Market Heifer class, owned by Kyle Mitchell of Airdrie, Alta., with AAA 60 marbling, a rib eye of 87 square centimetres, a Sterling Silver score of 82, and a carcass weight of 796.2 pounds. Mitchell collects $2,000 plus the value of the carcass.

Optimal points are scored at the Stampede’s Quality Beef Competition for: a rib eye that measures between 86 and 95 square centimetres; AAA marbling; two to four millimetres of back fat; fine-grain meat texture; and a carcass weight of 700 to 800 pounds. A total of 76 carcasses were entered in this year’s Quality Beef Competition, the most in recent memory. Just under 70 per cent of the field was graded AAA or higher, while about 43 per cent of those AAA-grade carcasses scored high enough to qualify for all branded beef programs, such as Sterling Silver or Certified Angus Beef.

“These are good results. I’m very impressed with what I saw . . . the marbling just keeps getting better. The ranchers are definitely getting the message out there, and that’s very important,” says Taylor. “I just attended a conference in Banff, where representatives of a grocery-store chain and a restaurant supplier were the keynote speakers. They preached and preached, through their entire talks, about portion size — and needing to get it down.”

Taylor has written the rules of the Stampede’s annual beef showdown to agree with consumer demands. And in recent years, he also added yield grade — that is, the percentage of the animal that yields beef — as another judging criteria for the Quality Beef Competition, in order to discourage overfeeding and waste. More than 51 per cent of this year’s entries earned the highest rating, Yield Grade 1, which demands 59 per cent yield or higher.

“That’s very important. It’s designed to discourage overfeeding. At the packing house, the fabrication floor trims everything to a quarter-inch (on the) back, and any extra fat goes into rendering, which is worth one cent a pound,” says Taylor. “I was impressed to see a judge this year (Brandon Callis of Brenham, Texas, who oversaw the 30th annual UFA Steer Classic) who would not place cattle over 1,350 pounds. We have to find a way to pay a producer the same dollar amount for an 800-pound carcass as a 900-pound carcass. I don’t think they’d keep feeding five- and six-dollar barley to make a steer 900 pounds anymore. That extra fat? It’s a cent a pound . . . and a waste of grain.”

Will Harvie of Olds, Alta., was third overall with a Hereford steer featuring AAA 10 marbling, a rib eye of 88 square centimetres, a Sterling Silver score of 80, and a carcass weight of 773.2 pounds. Harvie earns $1,500 plus the value of the carcass. In all, two Shorthorns and two Speckle Parks earned spots among this year’s overall Top 10 results.