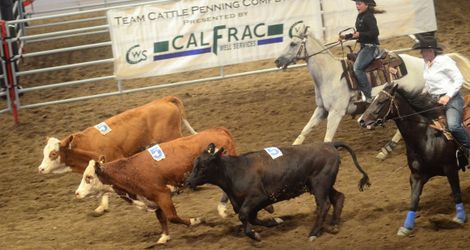 During the Stampede’s 2011 Team Cattle Penning Competition, presented by Calfrac Well Services, Taylor teamed up with her mom Cathy Sinclair and her grandfather George De Jonge for an emotional win in the 7 Class. And on Saturday in the Scotiabank Saddledome, she saddled up with a couple more Lower Mainland penners – Debbie Molnar and Sandy Price, both of Langley – for a thrilling victory in the 10 Class.

The B.C. trio overcame very long odds to enter that winner’s circle. The 10 Class is traditionally the largest division in the Stampede’s Team Cattle Penning Competition. And this year, partly owing to the Stampede’s 100th birthday and limited-edition, Vic Bennett-handcrafted Centennial Trophy Saddles up for grabs, a mind-blowing 295 teams threw their hats in the ring.

The Stampede’s Team Cattle Penning Competition, presented by Calfrac Well Services, has drawn a record 764 teams from across the continent for its four divisions, with a total prize purse of $394,610.

The 295 teams in contention to begin the 10 Class competition engaged in two rounds of preliminaries on Wednesday at the Okotoks Agricultural Society in Okotoks, Alta., with 20 teams emerging for Saturday night’s third round and final at the Saddledome.

As the 10 Class showdown set up shop in the Saddledome, the Calgary-based team of Skylar Hansen, Alex Hansen, and Denice Hansen held a clear advantage – with a scorching aggregate time of 47.57 seconds over the first two rounds in Okotoks. However, the Hansens opened the door with a no-time in the third round . . . and Sinclair, Molnar, and Price walked right through it, thanks to the fastest time of the third round (32.66) and a solid 40.28 seconds in the final.

Team Cattle Penning, a race against the clock, gives a team of three riders on horseback 60 seconds to separate three specifically identified cattle from a herd of 30 and direct them into a 16-foot-by-24-foot pen at the opposite end of the arena. Teamwork is paramount, with all three riders working in harmony to cut out the correct cattle and drive them to the pen. Teams of riders enter the Stampede’s four classes based on relative skill and experience — in ascending order from 7 Class, to 10 Class, to 14 Class, to the pure travelling professionals of the Open Class.

Suddenly, those regular Wednesday-night practices at Fast Times Farm are going to be that much more enjoyable for Sinclair, Molnar, and Price.

“We believe in each other, and that makes a difference. We are a team. We each have a job to do, we’re very flexible, and we all count on each other to get the job done,” said Molnar. “I wouldn’t be here without people like them, Cathy Sinclair, and (fellow Lower Mainland penner) Steve Sigouin.”

Molnar had previously won a 7 Class crown at the Stampede in 2008, and a 10 Class reserve title one year later. This marks Price’s first Stampede buckle.

The Saddledome will host Team Cattle Penning action for two more nights – the Open Class on Sunday, July 8, and the 7 Class on Monday, July 9 – with third rounds beginning at 5:30 p.m. and finals immediately following.