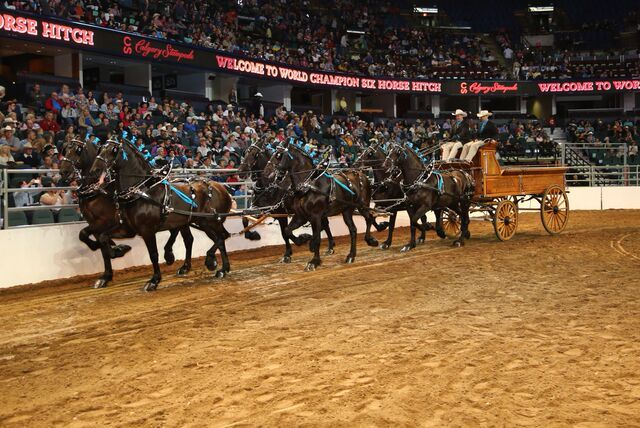 Calgary – He might have been wearing different livery, but Brian Coleman brought what was essentially his winning combination from 2014 back to the Calgary Stampede this year and once again earned Grand Champion honours in the World Champion Six Horse Hitch competition. It was a bit more stressful than last year, he said.

“We had basically the same group of horses as last year,” Coleman explained. “We had one horse the first night that wasn’t working too well so we had to put in one of the spares and kind of change the dynamics of the group.” Although the spare horses train with the regular hitch, Coleman admits that a last minute change is challenging. “It doesn’t have the same flow. You have to work for everything.”

For 2015, eleven handsome outfits of high-stepping heavy horses came to the Stampede with big buckles on their mind. Once again musicians, members of the Calgary Philharmonic Orchestra, provided a background of glorious sound as the shiny wagons pulled by three pairs of horses each performed in front of a large and appreciative crowd. Again this year, so close was the competition that the judges required three entries to be called back for a drive-off before Coleman was awarded his sixth Stampede Six Horse Hitch title. All four heavy horse breeds: Percherons, Clydesdales, Belgians and Shires, were represented in this year’s competition.