The Stampede’s Centennial Saddle program has proven to be a resounding success. Of the 100 custom made saddles, 99 have been bought by collectors as art pieces, by long-time Calgary Stampede sponsors as displays, by ranchers to be used as working saddles, and even by some high-profile Calgary businesspeople. The second last saddle was sold April 12 by online auction for $6,100 and only the saddle No. 1 remains to be auctioned during Stampede in July. 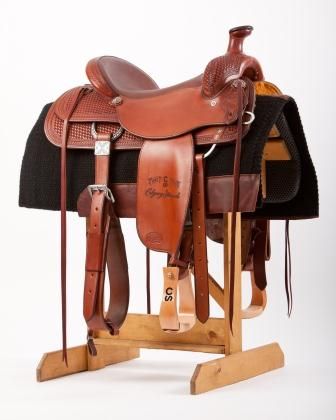 In April 2011, the Western Performance Horse committee announced that legendary saddlemaker Vic Bennet — one of the premier saddle makers in North America — had agreed to create 100 custom All Round saddles exclusively for the Calgary Stampede. These meticulously crafted Centennial Saddles, numbered and signed by Vic and Calgary Stampede President and Chairman of the Board, Michael Casey, even have the Calgary Stampede brand lasered on the stirrup.

“The success of the Centennial Saddle program is because people know that Vic Bennett’s name stands for quality craftsmanship,” said Karen Mix of the Stampede’s Western Performance Horse committee. “We were thrilled to see how far and wide the news of the program has travelled — CNN’s travel website even declared the saddle one of the top travel souvenirs of 2012.”

The Western Performance Horse committee will use proceeds from the Centennial Saddle program to reward winners of the Team Cattle Penning Competition, the Cutting Horse Competition, and the Working Cow Horse Classic at the 2012 Stampede — as well as the Stampede’s Cutting Horse Futurity in October — with Centennial champion saddles crafted by Bennett but of a different design.

The prized saddle No. 1 will go on the block Thursday, July 12 as part of the Stampede’s Western Art Auction at the BMO Centre’s Palomino Room, with renowned Alberta auctioneer Rob Bergevin handling proceedings.