Solomon and Larsen cash in on back-to-back wins 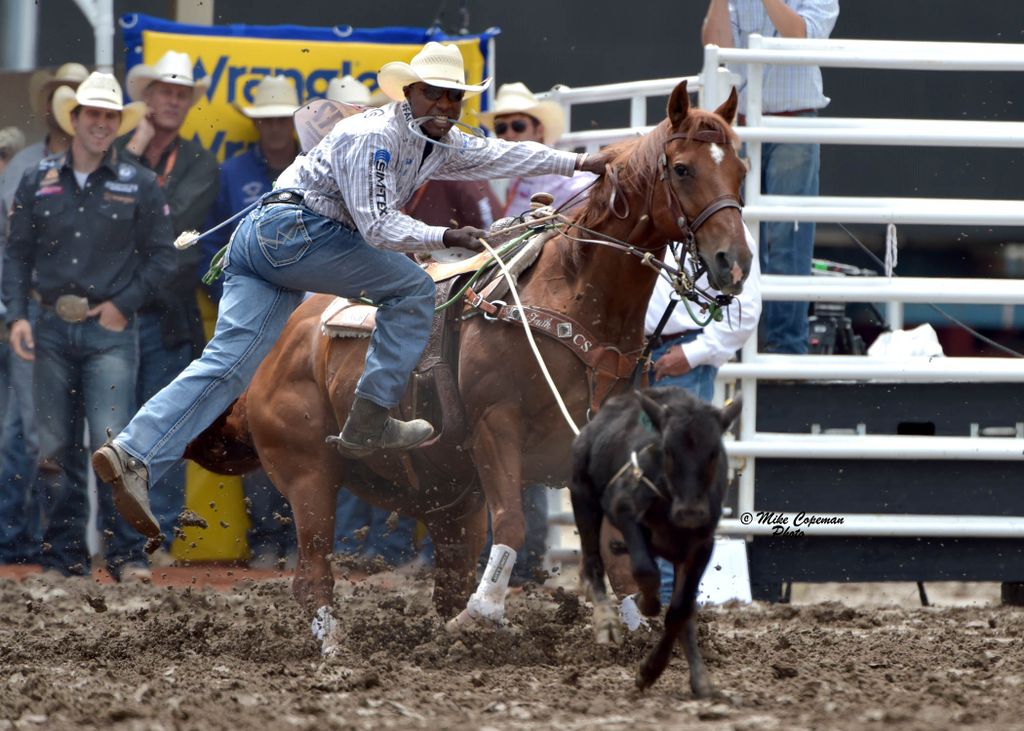 Solomon and Larsen cash in on back-to-back wins

Success can often fuel more success. There were four of Thursday’s Stampede winners who picked up their second bronze in Pool B action. A pair of them were back to back winners.

Cory Solomon managed to capture his second go-round win in a row, despite a slight bobble in his tie. He was still 7.2 seconds fast.

“I guess I’m thankful everybody else messed up also. When things are rolling, they’re rolling. I’m thankful, because it makes up for times when you couldn’t figure out why it wasn’t rolling.”

Solomon’s Pool B earnings sit at $11,000, bettered only by fellow Texan Fred Whitfield. The popular Stampede veteran has $12,500 to his credit.

“I’m happy with how everything is going so far,” said the Manitoba cowboy. “Just hopefully, I can keep drawing (horses) the way I have and be here Sunday.”

Chalk up another barrel racing win for South Dakota’s Lisa Lockhart. She and Louie handled the muddier track conditions, and were the only ones under 18 seconds, at 17.95. With her two wins and a placing she has $15,000 and sits as the Pool B leader.

Steer wrestler Dakota Eldridge of Nevada expanded his 2016 Stampede bronze collection, and bank account, when he got his steer tipped over in 4.1 seconds, for another $5500 injection. He’s the highest income earner in Pool B at $13,500.

It took an extra effort, but Sage Kimzey managed to collect his first Stampede bronze of 2016. The two-time World Champion rode his first bull to 79.5 points. But he jumped at the chance to take a re-ride, and claimed the round victory with an 87.5 mark on Chip Shot.

“There’s very few places that we get to go to throughout the year (like Calgary) that you walk in, and you’re just in awe of everything about the Stampede. You put me in a place like that, with a lot of money up for grabs and those bulls to get on, it’s pretty hard to beat me,” said Kimzey.

Kimzey is in second place for Pool B bull riders, with J.B. Mauney still the leader at $13,500, after adding in fourth place cash from Thursday.

They had to come up with an extra trophy bronze in the saddle bronc riding, when CoBurn Bradshaw and Jacobs Crawley both spurred to an 84 score, giving them $5000 apiece.

“I’ve been kind of scratching on ‘em the last two days, and it hadn’t come together,” admitted Crawley. “I was really happy to have a nice horse and get to enjoy some of that Calgary Stampede money. And win a bronze. I’ve never won a bronze. I’m excited to take one of those home. It’s pretty special, and I’ve got a spot for it at the house.”

It’s a tight race in the Pool B standings, with Jake Wright and Wade Sundell sharing top honors, with $9500 each. Bradshaw isn’t far behind with $9000.

Friday marks the final opportunity for Pool B contestants to sew up a place in the top four of their event, and guarantee a place on Sunday. Wildcard Saturday will feature all the rest of the contestants from both Pools, who will need to be among the two best on the day to advance.