The newest members of the Stampede family have arrived and they’re raven-haired twins. Twin calves, that is, born during a blizzard at Calgary Stampede’s OH Ranch the second weekend of March. Ken Pigeon, ranch manager, says all 118 Black Angus and 100 Red Angus cows at the ranch are expecting calves this spring, with cow U5 being first out of the gate. 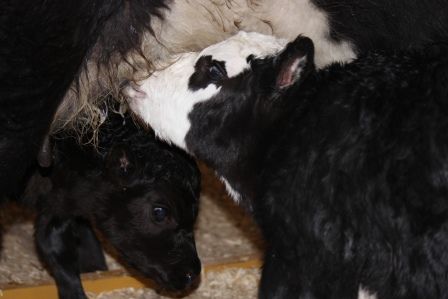 Ken and his ranch hand Rob Lippert are busy checking the cows every three hours, day and night, to ensure calving is going smoothly for the bovine ladies who make their home in the rolling foothills near Longview, southwest of Calgary. If any of the cows are having trouble delivering, Ken and Rob keep a sharp eye on them to ensure nothing goes awry.

Though the cow/calf pairs live out in cougar country, Ken says it’s actually fairly rare for wild predators like cougars, bears or coyotes to take down a member of the herd. “While we watch out for predatory animals, cows are very protective of their calves and can look after themselves very easily.”

After May, when all of the new calves will have arrived, they’ll spend an idyllic summer feeding on pasture grass around the OH Ranch before being weaned in the fall. That’s when heifers (females who’ve not given birth) will either be kept as replacements for the OH Ranch herd or will be sold to other herds as replacement heifers. Steers (castrated males), weighing around 600 pounds apiece, will be sent to market.

“We’ve had a good start to the year," Ken says. “We’ve had 93 black calves and six red calves born so far. It’s exactly what we want to see.”

Did you know?
Cows, like humans, gestate for nine months.