Calgary – “Hell or High Water” first appeared in social media, then the phrase took off on Stampede flood relief t-shirts, and now it’s the title of a song written by musical artist and performer at the 2013 TransAlta Grandstand Show, Marc Martel. 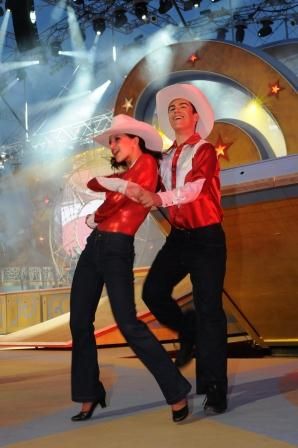 “As a songwriter I'm honored to be contributing to this year's Stampede in the best way I know how,” saysNashville-based Martel, who has been following the news of the floods in Calgary and southern Alberta. “I think the people of southern of Alberta are just about ready for a reason to celebrate in the aftermath of the flood. I think the Stampede is the perfect remedy for that. I hope people love the song and that it only bolsters the spirit that the Stampede was built upon.”

The song was sent to Emmy-Award-winning, and soon-to-be-producer of the Grandstand Show, David Pierce who loved the piece. Pierce produced the song and recruited The Young Canadians of the Calgary Stampede to record back-up vocals.

“When I first heard the song I was blown away,” says Pierce. “It was inspirational. It was like an anthem for the spirit of Calgary and southern Alberta.”

In a mere 48 hours during a busy time of final preparations and rehearsals for the Grandstand Show, Martel wrote and recorded the initial track, and sent it to Pierce. Pierce arranged it with a studio band in Calgary and recruited The Young Canadians to came together and create this incredibly moving song.

The song can be downloaded for free at CalgaryStampede.com/highwatersong.

Canadian singer/songwriter Marc Martel will be performing all 10 nights at the 2013 Calgary Stampede as part of the TransAlta Grandstand Show. After 10 years with the Juno award-winning Canadian Christian rock band Downhere, Martel shot to international fame when his audition video quickly became a viral sensation landing him a solo appearance on The Ellen DeGeneres Show. With close to eight million views and a little endorsement from Ellen, Marc went on to become the undisputed choice as Queen Extravaganza’s front-man on a worldwide tribute tour which launched on American Idol.

This guitar-wielding singer-songwriter is defying expectations with the release of his EP “The Prelude” which he calls an “experiment‟ in modern pop music. It’s clear that with his wide experience, deep sense of calling and unequivocal stage presence, Martel is taking pop far past the predictable.