Stampede hot off the press!

Stampede hot off the press!

Canadian Geographic has just published its Spring 2012 Travel edition, featuring a 12-page cover story on the Calgary Stampede. The issue also includes the winning submissions to the 2011 Western Heritage Values photo contest, and a fold-out map of Stampede Park showing three historical maps and some highlights of the Centennial celebrations.

These projects are part of a two-year Centennial partnership between Royal Canadian Geographical Society and the Calgary Stampede that began in 2011 to celebrate “100 years of western heritage and values”.

"This partnership is the perfect fit," says Aimee Benoit, Calgary Stampede Archivist. “The Geographic Society’s mandate is to make Canada better known to Canadians and the Calgary Stampede is a Canadian icon, recognized around the world.”

The partnership includes a number of other features: 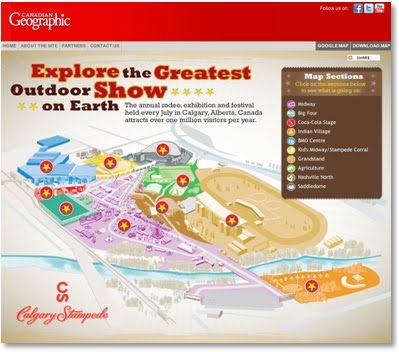