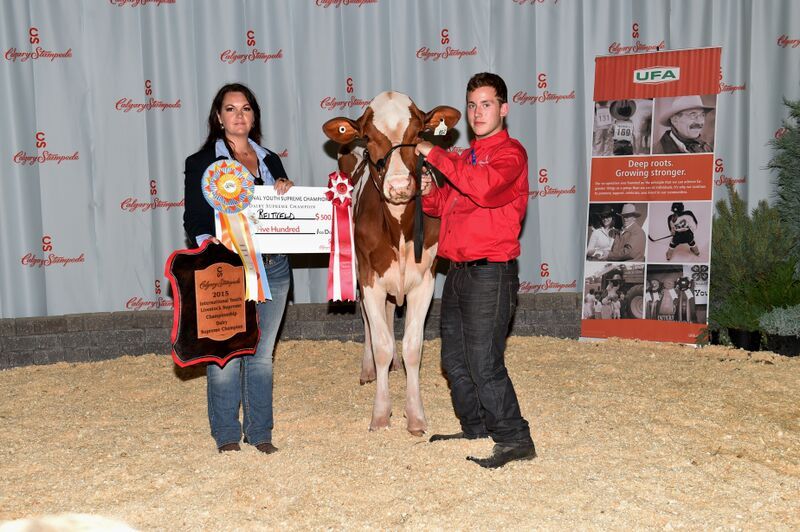 Calgary – The thing everyone knows about agriculture is that it means work, and lots of it. The 55 recipients of Stampede International Livestock Scholarships understand that.  To start with, they have to have done well at various livestock shows around the province like the Provincial 4-H Sheep Show, the Provincial 4-H Beef Heifer Show and the Provincial 4-H Dairy Show among others.  Then the 355 entrants, the most ever, and 589 head of livestock, went to the Stampede week Summer Synergy show in Olds.  If participants were trying for a scholarship, they had to have submitted a marketing assignment that was judged back in May.

After Summer Synergy, it’s off to Calgary for judged interviews that are the final determinant of just how much money the IYLS will provide toward their post-secondary education. The interviews are not an easy ride, as the judges make sure that the final recipients of the scholarships are worthy.

Five competitors are named Supreme Champions in their specialty. This year’s Supreme Champion, Commercial Beef, is Cole McMahon. “This is my seventh and final year in 4-H and my sixth year coming to Summer Synergy,” Cole says. His beef expertise doesn’t come from his family environment. “My parents are actually grain farmers,” he says. “This cow and two other heifers are the only cattle we own.”

Cole says his cow was actually double-qualified for Stampede as she was the Supreme Champion Commercial Female at the Provincial Beef and Heifer Show as well as Champion Simmenthal female at Summer Synergy.

“With Summer Synergy, every aspect of it is challenging,” he says. “You have the best young kids in the industry there. You have to know what you’re doing to be able to excel and place high enough to receive the scholarship.”

As for the interviews, Cole gives full credit to his 4-H public speaking experience. “That’s where 4-H has given me a great helping hand,” he says. “Without 4-H I wouldn’t have been able to do that.”

The scholarship money will come in handy for Cole next year, he says. “It’s awesome. That’s a huge reason why I even come, is those scholarship dollars. I’m accepted into the University of Saskatchewan to get a Bachelor’s degree in Agri-Business. Then I’ll return home to the family farm.”

There’s another lasting benefit of his 4-H involvement, Cole says. “Almost all my friends have come through the 4-H program - all my closest friends, at least. They’re friends I’ll have for the rest of my life and can always count on.”