Driven through Stampede Park lately?  If you have, you may have noticed a bit of construction.

Work has begun on the new the Agrium Western Event Centre being built on the south side of the Agriculture Building. To make this new facility possible, the Calgary stampede is undertaking two additional construction projects – the new Infield access tunnel and the shortening of the race track.

These two projects will create the additional public space required to support our Stampede activities and will provide improved access, safety and support space for the future Agrium Western Event Centre.

Stampede insiders will tell you that this isn’t the first time that the Calgary Stampede has changed the size of the famed “half mile of hell”. In 1974, during the construction of the new Grandstand, the race track was extended by one furlong to five and 1/8 furlongs.  The race track is now being shortened to four and 3/4 furlongs — just over a half mile.

Shortening the track has also created the opportunity to move and expand the Infield access tunnel.  The entry point, which provides access under the track, will now be located at the site of the former A and B barns, which have been demolished.

The new two-lane tunnel will accommodate trucks and trailers and features a pedestrian pathway, which allows for the safe separation of people from vehicles and livestock. A level track crossing will operate during events, excluding the Stampede, with the inside entry point at the north end of the Infield Grandstand.

As a part of this construction, the Stampede will also create be a number of parking spaces available for Stampede time and event parking within the north infield.

Both projects are scheduled to be completed June 2013 and just in time for Stampede 2013.  The Agrium Western Event Centre is scheduled to open late spring 2014. 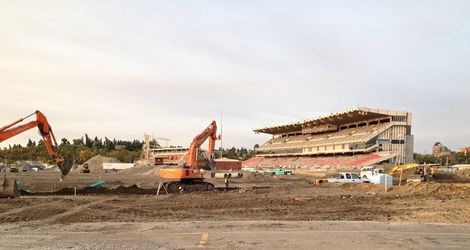