Calgary – Saturday night was Michael Bridge’s time to shine at the 2013 Stampede Talent Search.  With an awe inspiring performance of “Czardas” on the digital accordion, the 20 year old musician stood out from a talented field of performers to capture the Grand Prize of a customized performer development package including recording sessions, musical equipment and performance opportunities.  Bridge will also receive $4000, the President’s Trophy and a commemorative silver belt buckle 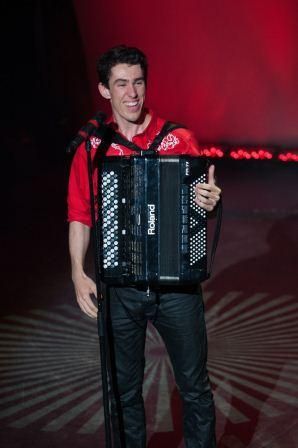 “For 33 years, the Stampede Talent Search has often been the very first to shine the spotlight on exceptional Canadian talent,” says Scott Henderson, chair, Stampede Talent Search committee.  “Michael Bridge follows in the footsteps of Paul Brandt, Michael Bernard Fitzgerald, Heather Liscano, Gordon Gietz, Trevor Panzcak and many others.  I have no doubt that Michael is another rising star that will soon be known across Canada and beyond.

The first runner-up was Kelsey Verzotti who performed a number from the musical “The Last Five Years.  Shelby and Jenna Doll, The Doll Sisters, were second runner-up with an original number entitled “Off the Edge of the Earth”. The third runner-up was Tayo Gbalajobi who sang “Blue Skies”. Cole Hruska received the “Fan Favourite” award which is chosen through texts and tweets. The Don Welden Award for most promising performer went to Alyssa Durnie.

This year, over 200 amateur Canadian youth performers demonstrated their singing, dancing, acting, musical and variety performance abilities during auditions for this annual showcase of talent. Fifty-seven senior performers (aged 13 to 21) were selected to compete for over $10,000 in cash and prizes. In addition, eight junior performers (aged six to 12) were showcased during the eight days of competition.

The mission of the Stampede Talent Search is to discover, develop, encourage and showcase young amateur performers. This program is just one of the ways the Calgary Stampede fulfills its commitment to provide youth with the opportunity to develop strong roots in their culture and heritage through programs that enhance personal growth, citizenship and education.