Stampede’s new campaign shows Calgarians the results of their contributions

Stampede’s new campaign shows Calgarians the results of their contributions

Whether they’re paying for their parking at Stampede Park, walking through the plus-15 to the Scotiabank Saddledome, wandering past the new Agrium Western Event Centre or switching on the TV, Calgarians will be seeing the results of our new Century Two marketing campaign that began in March. 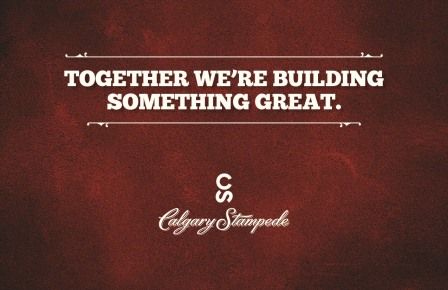 “With our first hundred years behind us, the Calgary Stampede is looking ahead to the next century with a new marketing campaign that shares our vision of how ‘Together We’re Building Something Great’,” says Jenn Mayuga, Marketing coordinator.

The campaign’s goal is to help visitors understand how the dollars they spend at Stampede Park - including admission, parking, food and beverages - are reinvested into our facilities such as the Agrium Western Event Centre, and youth programs and agricultural opportunities such as The Young Canadians of the Calgary Stampede, the Calgary Stampede Showband and Aggie Days.

“This new campaign really focuses on all of the key touchpoints where we transact with our guests,” says Mayuga. “For example, we’re adding a message across parking bar arms and handing out a postcard with each parking receipt that reminds guests their contributions support the development of Stampede Park as a year-round gathering place for Calgarians.

“We want it to be really clear that the dollars our guests are spending are reinvested to enhance Stampede Park’s venues and programs.”

Message boards placed around the Agrium Western Event Centre currently under construction carry the message, “Together we’re building something great.” Posters in the plus-15 walkway to the BMO Centre from the Saddledome also focus on the new Centre.

A “Century Two” television spot began running on CTV, CBC, Global and CityTV in March. “The message in our TV spot focuses on the future and how community support is helping to build the legacy of the next hundred years,” says Mayuga.

The campaign also reminds Calgarians that the Stampede is more than just our 10-day summer festival – it’s also a place where the community gathers to celebrate, learn, compete and host. Our state-of-the-art facilities are used for tradeshows, conventions, agricultural and western events, as well as youth programming and performances throughout the year.

“It is by reinvesting our profits from the use of our facilities that we are able to continue to build Stampede Park into a world-class, year-round gathering place for our next century,” says Mayuga.

“We couldn’t be successful without the participation and support of Calgarians.”