Steve Earle & The Dukes and The Mavericks to co-headline The Big Four Roadhouse July 10 - joined by Matt Mays, Whitehorse, and Lucette 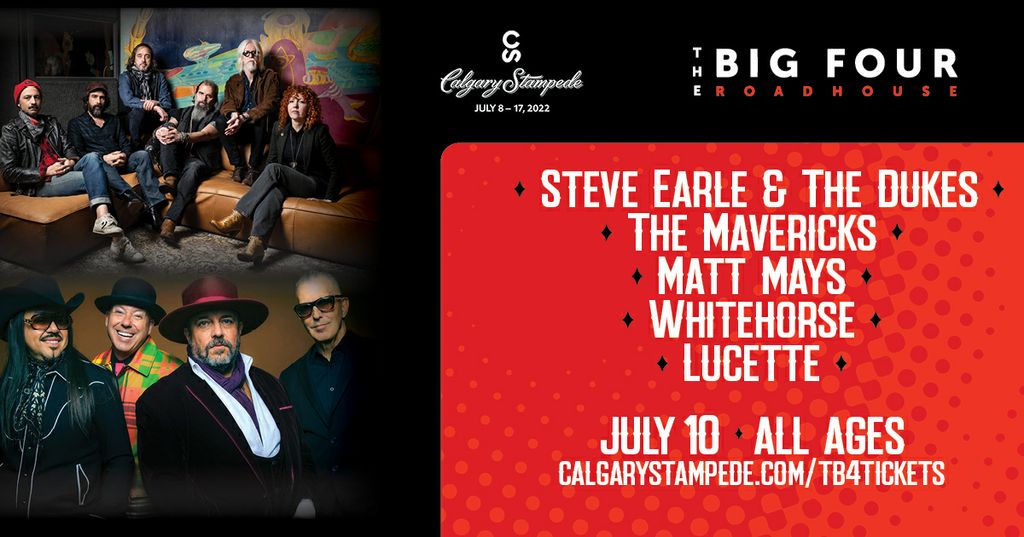 Steve Earle & The Dukes and The Mavericks to co-headline The Big Four Roadhouse July 10 - joined by Matt Mays, Whitehorse, and Lucette

Calgary - A little country, a little rock, a twist of alternative, a dash of bluesy noir and a pinch of dream pop. The 2022 Stampede concert in The Big Four Roadhouse will rock The Greatest Outdoor Show on Earth on Sunday, July 10, 2022, with an incredible night of music, co-headlined by Steve Earle & The Dukes and The Mavericks. Joining them for this music experience is Matt Mays, Whitehorse, and Lucette.

“This is not just a concert, this is a music experience,” says Adam Oppenheim, President of Stampede Entertainment. “We’re thrilled to bring so many top artists together on one stage, in one night. Music is returning to the Calgary Stampede and The Big Four Roadhouse, and we couldn’t be happier. These artists are not to be missed.”

Co-headlining the evening are two towering figures of Americana and country - The Mavericks and Steve Earle & The Dukes. Perhaps best known for Copperhead Road, Steve Earle & The Dukes continue to draw legions of die-hard fans from around the world. Earle’s 1986 debut album, Guitar Town, is a heralded classic of the Americana genre. Favourite sons of Miami, Florida, The Mavericks are the gold-standard in eclectic rock and country. Known for crisscrossing musical boundaries, the band’s countless hits include All you Ever Do Is Bring Me Down and There Goes My Heart.

Joining the bill is Matt Mays, the multi-award-winning Canadian indie-rock singer-songwriter, and acclaimed folk-rock duo Whitehorse. Alberta’s very own Lucette will open the stage, bringing her rustic Americana and indie dream-pop vibes. Together these five powerhouse performers will ensure an unforgettable music experience.

Tickets for the 2022 Stampede Concert in The Big Four Roadhouse go on sale to the public on Friday, April 1, at 10 a.m. Tickets are $89.00 (plus applicable fees) and will be available through CalgaryStampede.com/tb4tickets. Experience all the fun Stampede has to offer before the show – concert tickets include admission to the Calgary Stampede on the day of the event.

More about the artists:

Steve Earle is one of the most acclaimed singer-songwriters of his generation, a worthy heir to Townes Van Zandt and Guy Clark, his two supreme musical mentors. Over the course of 20 studio albums, Earle has distinguished himself as a master storyteller, and his songs have been recorded by a vast array of artists, including Johnny Cash, Waylon Jennings, Joan Baez, Emmylou Harris, the Pretenders, and more. Earle’s 1986 debut album, Guitar Town, is now regarded as a classic of the Americana genre. Restlessly creative across artistic disciplines, Earle has published both a novel and a collection of short stories; produced albums for other artists; and acted in films, TV shows and on stage.

The Mavericks are an eclectic rock and country group known for crisscrossing musical boundaries with abandon. The group has gone through three distinct phases since it was founded in Miami in 1989. An initial period of heady success marked by big hits and critical acclaim in the ‘90s, a long hiatus starting 2003 when the musicians each went their own way, and finally, a triumphant reunion in 2012 which held long enough for them to recently celebrate the band’s 30th anniversary. Now, the Mavericks have ushered in the fourth phase of their evolution with the #1 Billboard debut of En Español, released on the band’s own Mono Mundo label.

Since departing seminal alt-country collective The Guthries in 2002, Matt Mays has alternated between solo projects (his self-titled debut, the film soundtrack - When the Angels Make Contact) and band projects (the eponymous Matt Mays & El Torpedo record and 2008’s Terminal Romance). Following the dissolution of Matt Mays & El Torpedo in 2009, Mays released Coyote in 2012 to much acclaim, including a JUNO Award win for Rock Album of the Year. In 2017, Mays released Once Upon a Hell of a Time, to be followed a year later by the album’s ‘woody’ companion Twice Upon a Hell of a Time. As the pandemic shut down touring in early 2020, Mays set up a studio in his garage and produced Dog City, an inspiring album written from the perspective of a rescue dog. In early 2021, From Burnside With Love, a live album showcasing unplugged versions of his most popular songs, was released along with a concert film of the same name.

Since their debut in 2011, Toronto’s Whitehorse has evolved from magnetic folk duo to full-blown rock band. In truth, Whitehorse is never fully either one or the other, but an ever-evolving creative partnership between Melissa McClelland and Luke Doucet. As five consecutive JUNO nominations in four categories attest, whether it be a holiday album or reworked blues covers or pop noir album, Whitehorse rises to every challenge with guitar wizardry and magnetic harmonies. With The Northern South Vol. 2, Whitehorse returned to their JUNO Blues Album of the Year nominated project, which reimagines the early days of electric blues. For the second instalment, The Northern South Vol. 2 deals 1950s blues bops, sexed-up cuts and hellfire gospels to meld the grooves and melodies of the original selections with the band’s steamy, swampy, squalling approach. Both snapshot and slingshot, with an eye on the end-of-days and Whitehorse’s ear for blues grooves, The Northern South Vol.2 expanded the universe of the Northern South with foreplay, foreboding, fever and Fenders--plenty of them--on cuts from Howlin’ Wolf, Willie Dixon, Jimmy Reed, Slim Harpo and more.

Lucette is the moniker of Canadian artist Lauren Gillis, a soulful and emotive singer who self-describes her music as “country-infused dream-pop.” Her two albums vary from dark folk and southern gothic tales, to what Rolling Stone describes as “a bold expansion of Lucette’s melodic sensibilities...that avoid the rootsy clichés of Americana music.” Lucette has toured the United States, Canada, and the UK with artists such as Joe Ely, David Ramirez, The Secret Sisters, and Netflix documentary star Rodriguez. Following the release of her second album, Deluxe Hotel Room, she performed her own headlining tour in the summer of 2019. Lauren is currently finishing writing for her new album and is scheduled to record with producer Matt Pence (Jason Isbell, Elle King, Shakey Graves) in 2022.