Strathmore’s Anderson ready to Cowboy Up in Monday’s final

Strathmore’s Anderson ready to Cowboy Up in Monday’s final

CALGARY – Feel free to call Jim Anderson an overnight sensation. Understand, though, that there were about 5,500 nights’ worth of preparation involved.

Last summer, the Strathmore, Alta.-based Anderson surprised nearly everybody by finishing second overall aboard his horse, CK Olena Doc, at the Calgary Stampede’s second annual Cowboy Up Challenge at the Scotiabank Saddledome. 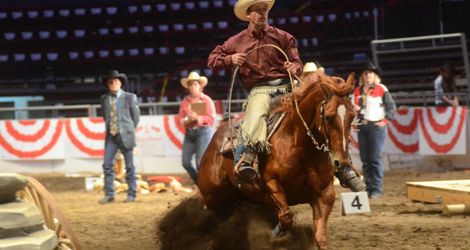 The Cowboy Up Challenge has quickly become a marquee event for the Bluff Dale, Texas-based Extreme Cowboy Association (EXCA), which ventured north of the 49th parallel for the first time when it staged the piece of spectator eye candy at the 2010 Stampede.

Anderson’s 2011 runner-up finish marked his debut in an Extreme Cowboy Racing event . . . but he can hardly be called a rookie.

“He came out of nowhere, but he was raised for that contest,” notes Pete Fraser, an advisor to the Stampede’s Cowboy Up Challenge. “Jim is absolutely an exceptional horseman. He’s a world-caliber reining horse competitor — but what people don’t realize is that he can rope, he can ride broncs, he can ride fast, he can do everything.

“He’s absolutely a horsemanship dream, when you consider the bag of tricks at his disposal.”

Anderson, who trains reining horses, starts colts, and conducts horsemanship clinics, has competed at the National Reining Horse Association’s (NRHA) Futurity and Derby in Oklahoma City for about 15 years, qualifying for the Limited Open finals three times during that span. During this year’s Cowboy Up Challenge, he’s riding Picasmokenlittlelena, a client-owned, seven-year-old quarter-horse mare.

With two rounds’ worth of weekend preliminaries now in the books, the top nine horse-and-rider teams in point standings — plus one more wild-card team — have advanced from the original field of 13 to the Cowboy Up Challenge’s championship final on Monday, July 9 at 3 p.m. at the Saddledome. First place in Monday’s winner-take-all showdown is worth $7,000, while the runner-up, or reserve champion, takes home $4,000. The top two also earn handtooled Stampede belt buckles.

“I grew up with natural horsemanship. When I was 14 years old, I took my first Ray Hunt clinic, and I’ve taken Tom Dorrance clinics too. I’ve got a good foundation in natural horsemanship . . . and an event like the (Cowboy Up Challenge) does demonstrate what you can do in that regard,” says Anderson.

“And yes, this event is a huge spectator event — with the lights, the sound, the big crowds in the Saddledome. But I’ve competed enough that when I enter that ring, it doesn’t matter to me if there are two people or 10,000 people,” he adds. “I’m focused on how I can get through that obstacle course successfully and efficiently.”

A timed and judged event, Extreme Cowboy Racing demands both horsemanship and speed, and challenges both horse and rider with an obstacle course that may include moguls, bridges, log crossings, tunnels, cowboy curtains, roll backs, and water crossings, among others. Judges award points for each obstacle, on a scale of one to 10, based on criteria such as horsemanship, cadence, control, and overall execution. Horse-and-rider teams are required to complete each obstacle within a predetermined time period to collect points. The brainchild of Craig Cameron, who’s known as the “cowboy’s clinician,” Extreme Cowboy Racing is a timed and judged event that demands both horsemanship and speed – and has been the fastest-growing sport in the equine industry in recent years.

As with other EXCA events, all three rounds of competition at this year’s Cowboy Up Challenge feature a different course layout. Prior to Monday’s championship round, the 10 riders will be able to briefly walk the course on foot with judges, but will not be able to practise on horseback.

After learning from 2011, Anderson – who placed third overall in Saturday’s first go-round, and won Sunday’s second go-round for a $1,000 payday – says pace is everything heading into Monday’s final. “You want to be correct, but it’s important to keep up a flow as you go through the (obstacle) pattern,” he says. “You want to keep up your momentum, and keep the judges watching.”