CALGARY – Lucy Streeter found out pretty quickly that her new equine partner wasn’t much for taking direction. Thankfully, she had a few irritable 1,500-pound precedents right in her own back yard. 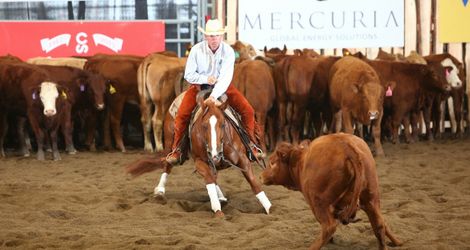 Streeter has enjoyed a startling streak of regional success with Peptos Playtoy 005 ever since she purchased the cutting horse, sight unseen, at Fort Worth, Texas, in the fall of 2009. But the quarter-horse mare, now seven, isn’t what you’d call particularly sociable . . . much like the Brahma cross bucking bulls that Lucy and her husband Tyler raise at their ranch near Nanton, Alta., for the professional bull riding circuit as part of the Alberta-based Wild Hoggs partnership.

“You pretty well can’t tell the bulls anything, of course. They’ll do whatever they want to. And you know what? This horse is much the same,” says Lucy with a laugh. “She’s a fractious mare, but we seem to get along quite well. I don’t get a lot of people to school her for me; I usually try to do that on my own, because of her nature. But she definitely wants to cut, and enjoys her job. I definitely don’t try to show her who’s boss, because she’s pretty strong-willed. But she’s very honest. Show her what you want her to do, and she’ll do it 110 per cent.”

Last year, at the Calgary Stampede’s Cutting Horse Competition, Lucy and Peptos Playtoy 005 juked and jived their way to a fourth-place showing in the Non-Pro category.

And this year’s 40th annual Cutting Horse Competition — a participating event on the Fort Worth, Texas-based National Cutting Horse Association’s Mercuria/NCHA World Series of Cutting — is now down to the short strokes. With Wednesday’s action in the books, the Stampede’s Cutting Horse Competition will culminate with the championship finals on Thursday, July 12 under the Big Top — starting at 5 p.m. with the Non-Pro, the Open, and the Youth divisions, in that order.

Thanks to the involvement of the World Series, the Stampede’s Cutting Horse Competition will feature $50,000 in added money — $25,000 for the trainers and professional cutters of the Open division, and $25,000 for the amateur riders of the Non-Pro division — bringing the total prize purse to just over $84,000.

The sport of cutting shines a spotlight on the pure athleticism, instinct, agility and intelligence of the cutting horse. With horse-and-rider teams attempting to cut three individual cows out of a herd within 150 seconds, cutting has evolved into one of the most exciting equine events in North America. Lucy and Peptos Playtoy 005, who won the Non-Pro Classic/Challenge division together in the fall of 2010 at the Stampede Cutting Horse Futurity, presented by Wrangler, are taking a break this summer — Lucy and Tyler are expecting the couple’s first child, a son, in late August.

Besides their cow/calf operation, Lucy and Tyler — a former bull rider in Canada who earned a little money on the Professional Bull Riders circuit — have already tasted success with that Wild Hoggs bull-raising venture, which includes former Canadian and Stampede bull riding champ Justin Volz as a partner.

One of the Streeters’ products, Gastank, was selected for last October’s PBR final at Las Vegas, and sold to North Carolina stock contractor Jeff Robinson for $60,000.

Wednesday morning under the Big Top, the 25 entries in the Open division fought tooth and nail during the first go-round of the Stampede’s Cutting Horse Competition, hoping to advance to Thursday’s final. A total of eight teams will battle it out in the Open final for a prize purse of $36,500 — Josh Sleeman of Yelm, Wash., who scored a first-round 222 on Patty La Cat; Sleeman on Ho Chi Minnie (221); Chubby Turner of Weatherford, Texas, aboard CD Boonsmal (218); Dustin Gonnet of Cayley, Alta., on Innocent Scoot (218); Bill Speight of Rocky Mountain House, Alta., aboard Pistols Smart Acre (218); Brian Anderson of Idaho Falls, Ida., on Sues So Smart (217); Dave Batty of Vernon, B.C., aboard Duallys Cat (216); and Denton Moffat of Armstrong, B.C., on Rio Merada (216).

Winners of the Open, Non-Pro, and Youth classes will be awarded limited-edition Centennial Trophy Saddles, handcrafted by Vic Bennett Saddles of Sherwood Park, Alta. — a once-in-a-lifetime opportunity created in honour of the Stampede’s Centennial celebrations.

As for Lucy, while she’s taking an enforced vacation this summer, the former pupil of regional cutting legend Carl Gerwien expects to be back in the saddle in 2013.

“Count on it. Cutting’s my life,” she says. “It’s become quite an addiction for me. I miss it already.”