Calgary, Alberta – The Calgary Stampede, ready to welcome the world to the Centennial celebration of The Greatest Outdoor Show on Earth, is today thrilled to unveil the massive and stunning new bronze sculpture, By the Banks of the Bow. This magnificent piece of art will soon become a focal point as the Stampede continues in its promise to preserve and promote western heritage and values. 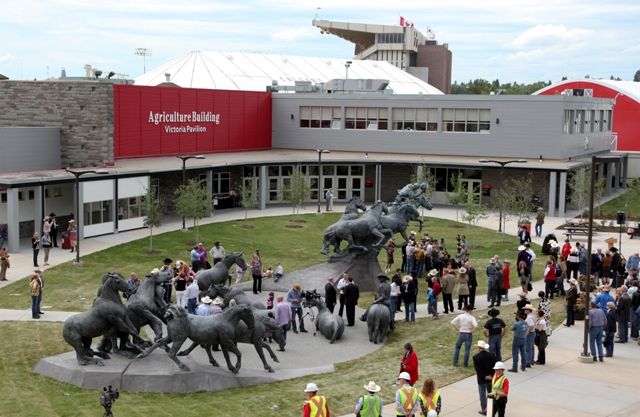 In conjunction with the unveiling of By the Banks of the Bow, the Stampede, the Government of Canada, the Government of Alberta and other funding partners are also pleased to officially unveil the $4.4-million renovation of the Agriculture building and Public Plaza which will all be a part of the new Agriculture Discovery Zone on Stampede Park.

Renovations to the Agriculture Building provide updated and new amenities designed to enrich the interactive nature of the rural-urban experiences the Stampede provides to the agriculture industry, youth groups, western event enthusiasts and Calgarians. The Agriculture Building is the oldest building on Stampede Park with the original construction taking place in 1920. When the Agrium Western Centre is complete in 2014, the Agriculture building will provide all the stalling and gathering spaces required to support the major show arena.

By the Banks of the Bow, commissioned nearly four years ago, will not only serve as an icon of the Stampede’s equine and agricultural past, it will also symbolize the Stampede’s drive to the future and our vision of becoming a world-class, year-round gathering place for Calgarians and visitors alike. Created by local artists and ranchers Bob Spaith and Rich Roenisch, the piece depicts a snapshot of Calgary’s agricultural past, when the area around Calgary was a wide open prairie and ranchers herded their horses across the Bow River.

“We’ve reached the exciting pinnacle of one of the greatest Public Art projects ever undertaken by the Stampede, its volunteers and employees,” said Michael Casey, president and chairman of the board, Calgary Stampede. “But, we wouldn’t have made it to this day without the phenomenal support of two major private donors, Coril Holdings, the Carthy Foundation and the Friends of Smithbilt Hats. With their generous support we have been able to create this unbelievable work of art that embodies the spirit of the Stampede along with its western heritage and values.”

Situated in the heart of Stampede Park, By the Banks of the Bow is positioned to remind guests that agriculture will always be at the heart of the Stampede.

“The Agriculture building is a Stampede Park landmark, and these renovations are a great way to honour the Calgary Stampede on its 100th birthday,” said Devinder Shory, Member of Parliament for Calgary Northeast, on behalf of the Honourable Denis Lebel, Minister of Transport, Infrastructure and Communities. “Our government is proud to invest in infrastructure projects that celebrate our history and important heritage institutions.”

“The Stampede offers a unique perspective of Alberta’s agricultural heritage and values representing our past, present and future,” said Premier Alison Redford. “The renovations, new plaza and spectacular art work pay tribute to our western heritage, set the stage for another 100 years of Stampede celebrations and will support both business and agricultural events at Stampede Park for years to come.”

The Government of Canada and the Government of Alberta committed $25 million each toward the revitalization of agriculture buildings on Stampede Park, most of it dedicated to the construction of the new Agrium Western Events Centre, on which construction is set to begin shortly after this year’s Stampede.

Of the federal commitment of up to $25 million under the Building Canada Fund, approximately $2.3 million was allocated to the Agriculture building renovation.

Investing in infrastructure is a key part of the Government of Canada’s plan to create jobs, generate economic growth and ensure long-term prosperity. Over the course of the summer, the Government of Canada will be engaging provinces, territories and stakeholders in a series of roundtables to develop a new long-term infrastructure plan. This plan will focus on investments that support job creation and economic growth, while building strong, prosperous communities across the country. In addition, the Government of Canada will hold a roundtable with national stakeholders and representatives of the private sector at the end of the summer. Working together to develop this plan will provide new opportunities for all orders of government and the private sector to build partnerships to improve public infrastructure in Canada.