CALGARY – Les Timmons was nicknamed Hollywood for his flair in the cutting arena. It seems he’s found an equine companion after his own heart.

Timmons, an icon of the Canadian cutting scene, added another chapter to his already considerable legacy Saturday night at the Stampede Corral — posting a 222 aboard Sindicat to win Open Futurity, the marquee class, at the 32nd annual Calgary Stampede Cutting Horse Futurity, presented by Wrangler. 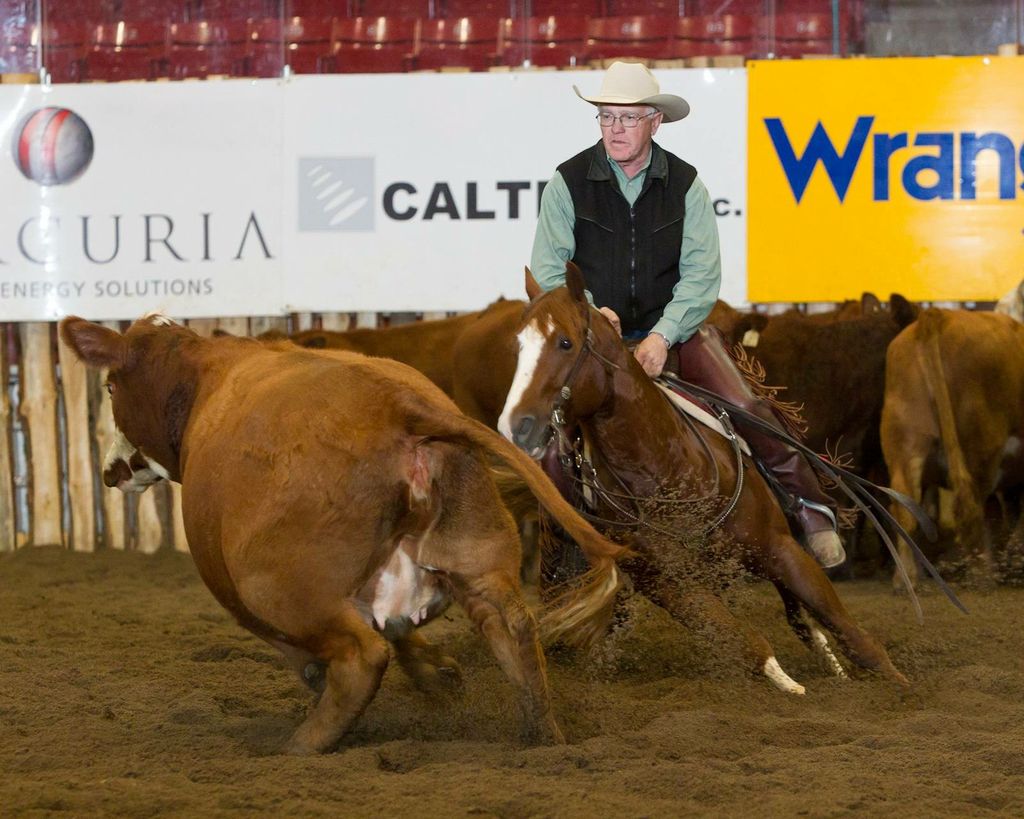 Timmons, of Kamloops, B.C., has been training Sindicat, a three-year-old stud horse, since he was purchased by owner Janet Hotte of Hinton, Alta., at Fort Worth, Texas, last December.

“What I like about him, in the actual show pen, is his style. He’s all ear, and he just wants to go for the gusto,” said Timmons, the president of the Canadian Cutting Horse Association (CCHA), whose victory on Saturday triggered a pay day of $16,681.37. “He wants to be the man.”

After scoring a 217 in Wednesday’s first go-round and a 210 in Thursday’s second preliminary round, Timmons and Sindicat stepped it up when it counted during Saturday’s 17-team final. That 222 was the highest score of the week in the Open Futurity class, and was enough to edge Timmons’ former pupil Brad Pedersen of Lacombe, Alta., and his mount Catlynn, owned by Calgary’s Ron Mathison, by three points. Pedersen’s 219 aboard Catlynn was worth a reserve champion, or runner-up, cheque for $12,511.03.

“When we bought (Sindicat), he was working cows pretty good. He was a pretty nice colt, and he sort of stood out in the crowd down there, as far as I was concerned,” said Timmons. “He’s solid. Probably the best three-year-old I’ve ever had.”

With 267 entries from both sides of the 49th parallel and $318,000 in prize money this year, the Stampede Futurity is the premier cutting event in Canada. Saturday night, the professional riders and trainers of the Open classes took centre stage at the Stampede Corral, with finals in three equine age classes — Futurity, for three-year-olds; Derby, for four-year-olds; and Classic Challenge, for five- and six-year-olds.

In addition to prize payouts topped up with $100,000 in added money, this year’s Stampede Futurity is also dangling extra incentive — with the final Centennial Trophy Saddles going up for grabs as part of the Stampede’s 100-year birthday bash. Those saddles are being awarded to the Open and Non-Pro champions in each of the Futurity, Derby, and Classic/Challenge classes, as well as the winner of the Non-Pro 7-Up class.

Meanwhile, Pete Branch of Farwell, Texas got what he came for — on top of a fat winner’s cheque for $9,720 and a trophy saddle, that is. By marking a 219 aboard Kit Kat Sugar, he earned the Stampede Futurity’s Open Derby crown — and enough points to clinch the National Cutting Horse Association’s (NCHA) Open Horse of the Year award for the four-year-old stallion owned by Lonnie and Barb Allsup of Clovis, N.M.

Branch and Kit Kat Sugar arrived in Calgary, alongside Lloyd Cox of Fort Morgan, Colo., and four-year-old stallion Hottish, waging a furious two-team battle for the NCHA’s Horse of the Year title. By winning Saturday’s class, Branch and Kit Kat Sugar ensured that their rivals couldn’t overtake them in the overall point standings; Cox and Hottish, owned by Dustin and Deena Adams of Dublin, Texas, posted a 217.5 in Saturday’s final and earned a reserve champion, or runner-up, cheque for $7,405.71.

Like Cox and Hottish, Branch and Kit Kat Sugar have been crisscrossing the continent all year collecting points in the Horse of the Year chase. They have just one show left — the Southern Futurity in Jackson, Miss.

“My first cow wasn’t as good tonight, and I was a little worried it could cost me, but as it turned out, Lloyd’s third cow wasn’t very good either,” said Branch. “These are just two great horses, and they’ve been going at it all year. I had several people come up to me and say they hated to see it end.

Branch becomes the first trainer in history to have two NHCA Open Horse of the Year winners in his stable, after riding Little Badger Dulce, Kit Kat Sugar’s grandmother, to the same title back in 1994.

“Little Badger Dulce was the very first NCHA Horse of the Year. When I won the first one, it wasn’t a points deal — the (NCHA’s) executive board decided by a vote,” added Branch. “That mare had won everything that year, so it really was no contest. This points deal, it’s actually a race. It’s a lot more exciting, you know?”

“I haven’t had the opportunity to show her very much. I showed her one other time, at a weekend show, before we came here, just to get to know her,” said Verstegen. “Here in Calgary this week, she proved she’s a really, really good show horse. She’s the kind who can go cut any cow in the pen, and hold it.”

Branch and Reymember That Cat, also owned by the Allsups, marked a 222 for the Open Classic/Challenge reserve title, worth $6,975.83.

Saturday’s Open Futurity final was a 17-team affair, after 51 teams started the competition on Wednesday. The Open Derby final saw 14 teams square off for glory and prize money, after 37 teams had originally thrown their hat in the ring. The Open Classic/Challenge final, meanwhile, featured the best 16 teams from an original field of 47.

On Sunday, Oct. 14, the Stampede Futurity’s focus will shift to the Non-Pro riders, as the four Non-Pro finals — Futurity, Derby, Classic Challenge, and 7-Up for horses aged seven or older — begin at approximately 1 p.m. at the Corral. Non-Pro riders make no part of their income by training horses, and can only enter horses owned by themselves or immediate family members. A $50,000 Limit Amateur Class, for those with NCHA earnings of less than $50,000 as of Jan. 1, 2012, is also offered within Non-Pro’s Derby and Classic Challenge classes.

To watch the Stampede Futurity live on the web, please visit ag.calgarystampede.com/futurity-live-stream.html