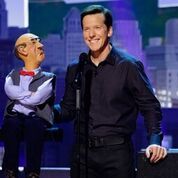 Calgary (Alberta) - The Calgary Stampede and Stampede Concerts Inc. are thrilled to bring hilarious comedian and skilled ventriloquist, Jeff Dunham, to the 2016 Virgin Mobile Stampede Concert Series. Described by Time Magazine as, “the most popular comedian in the United States” Dunham and his entourage of characters will hit the Scotiabank Saddledome stage on Sunday, July 17.

“This is the first time we have brought a comedian to the Saddledome stage during Stampede,” says Adam Oppenheim, managing director, Stampede Concerts Inc. “Jeff Dunham is an extremely talented comedian and a touring force of nature.  There is no doubt the Saddledome will be filled with laughter.”

Dunham’s television specials and series have been the highest rated programming in Comedy Central history, his DVD sales have reached seven million units, his videos have received almost a billion views on You Tube, and his live concerts have become mega-events played in front of sold-out arenas worldwide