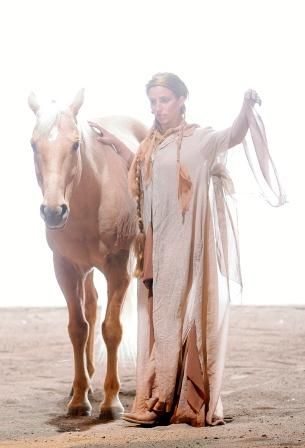 “We focused on selecting local performers that were known throughout the equestrian community to be the best in their respective disciplines”, says Dan Finley, executive producer, TAILS. “Each performer is local except for the feature entertainer, Tomas Garcilazo, who hails from Mexico City.”

Selecting Garcilazo as the feature entertainer was a natural choice as he is an internationally acclaimed horseman and rope artist. He has been a feature performer for two years at Disney’s Wild West Show in Paris, France and has appeared on Broadway in New York City as well as numerous other productions.

Mirroring Garcilazo’s success, at only 18 years of age, Madison MacDonald has accomplished what most rodeo girls dream of. MacDonald recently performed in the National Finals Rodeo in Las Vegas, where only five individuals across North America are chosen to perform. Alongside two other trick riders, Sally Bishop and Rosalyn Beaton who both previously performed in Cavalia, MacDonald will be performing the trick riding acts as well as some of the liberty acts in TAILS.

Garcilazo, Bishop, Beaton and MacDonald’s accolades speak to the caliber of the cast. Requiring a specific skill set for each of the unique acts in TAILS, the casts’ resumes include being stunt doubles on feature films, training buffalo, being a musician, trick riding, and hoop dancing.

Although most of the cast is well versed in the entertainment world, a common sentiment among them is that TAILS is a unique opportunity for a performer.

“TAILS provides a stage unlike any other large production I have worked on,” says Matt Masters, narrator and singer. “TAILS is a bold and ambitious undertaking. We are not only conscientious of our own performance but the moves we make around the animals. This adds another dimension to mastering our performance and increases the intensity.”

Come revel in the unique horse-centric world the cast experiences during every show. The ENMAX Corral Show – TAILS: Three Horses. One Legend. will run three times daily at noon, 4 p.m. and 8 p.m. and is free with Stampede Park admission.