The 2013 Stampede Queen and Princesses are crowned

The 2013 Stampede Queen and Princesses are crowned 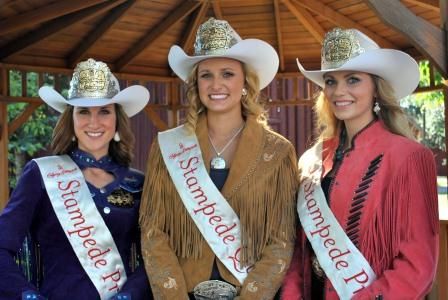 Jessica is 21 and lives just outside of Okotoks. She is originally from Arrowwood, Alberta and currently works as a dental assistant in High River. She spends most of her free time riding horses, going on hikes with her family, and camping in the mountains. Jessica is a self-proclaimed “true farm girl” and owns a Quarter Horse named Woody.

Danielle is 21 and lives in Calgary, though she is originally from Okotoks. Danielle attends the University of Calgary as a Law and Society major with the goal of attaining her Human Resources Management certificate to complement her education. Danielle spends her free time competing in reining and ranch cutting with her horses and volunteering.

Catherine is 22 and lives at Rafter Six Ranch in Exshaw, though she is originally from Saint-Bruno-de-Guigues, Quebec. She works at a spa in Canmore and spends most of her free time going out on rides with guests at the ranch or working with her horse. Catherine loves being active and spending time outdoors doing many different activities.

The Stampede Royalty act as official ambassadors of the Stampede by promoting western heritage and values within the community and around the world. The winning three contestants must embody the Stampede values of integrity, pride of place, western hospitality and commitment to community.

Follow the Stampede Queen and Princess though their year at blog.calgarystampede.com/category/stampederoyalty