The Beach Boys celebrate 50 years at the Calgary Stampede Centennial

The Beach Boys celebrate 50 years at the Calgary Stampede Centennial 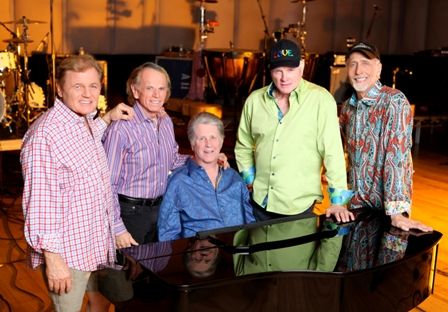 The legendary Beach Boys, Brian Wilson, Mike Love, Al Jardine, Bruce Johnston, and David Marks have come together for the first time in 20 years for their golden 50th Anniversary Tour, and the Stampede is one of only three Canadian shows and the only western Canadian stop on their 40-plus date international tour.

“People of all ages will enjoy this show,” says Paul Rosenberg, vice president, Programming, Calgary Stampede. “With so many great hit songs, you would be hard pressed to find someone without a favourite.”

For five decades, America’s first pop band to reach the 50 year milestone, has recorded and performed the music that has become the world’s favourite soundtrack of the summer.  Rock and Roll Hall of Fame Inductees, the Beach Boys continue to hold Billboard / Nielsen SoundScan’s record as the top-selling American band for albums and singles, and they are also the American group with the most Billboard Top 40 chart hits with 36.

The band, who recently performed together at the 2012 GRAMMY Awards, will also release a new studio album entitled That’s Why God Made The Radio and commemorative 50thAnniversary catalog with Capitol/EMI.

Tickets for the Wednesday, July 11 show start at $49.50 plus taxes and fees, and go on sale Saturday, May 5 through Ticketmaster.  Virgin Mobile will be offering its Members exclusive priority access to tickets for the show.  Members can go to virginmobile.ca/lounge for details on the pre-sale which runs from May 1 at 10 a.m. until May 3 at 10 p.m. in advance of general ticket sales.

Please join us for our biggest year ever at the 2012 Centennial Calgary Stampede July 6 – 15, 2012.  For more information visit calgarystampede.com.