The best of the best returning for 2013 Stampede Rodeo

The best of the best returning for 2013 Stampede Rodeo

Calgary – The world’s best rodeo cowboys and cowgirls are coming back to the richest outdoor rodeo in the world – the $2 million Calgary Stampede.  A total of 120 competitors in the six major rodeo events have qualified to return to The Greatest Outdoor Show on Earth. 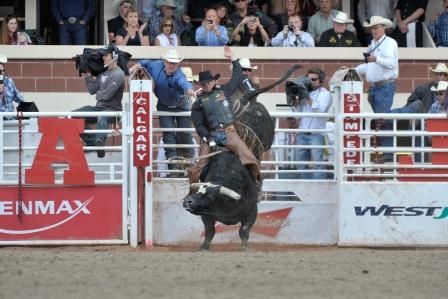 “The Stampede Rodeo has now become a showcase for rodeo’s elite,” says Keith Marrington, director, Rodeo, Calgary Stampede. “These athletes, who carry on cowboy and cowgirl traditions, know they can earn a $100,000 paycheque if they can rise to the top of their event on our million dollar Sunday Showdown.”

Ladies Barrel Racing should be even more exciting this year because it will be sanctioned by the Women’s Professional Rodeo Association, meaning the money won at the Stampede will be included in the racer’s yearly standings. Some of the best Barrel Racers in the world are now seeing new opportunities to enhance their position in the standings by making the trek north to the Stampede.

As we enter our second century, the Calgary Stampede celebrates the people, the animals, the land, the traditions and the values that make up the unique spirit of the west. The Calgary Stampede contributes to the quality of life in Calgary and southern Alberta through our world-renowned 10-day Stampede, year-round facilities, western events and several youth and agriculture programs. Exemplifying the theme “We’re Greatest Together”; we are a volunteer-supported, not-for-profit community organization that preserves and promotes western heritage and values. All revenue is reinvested into Calgary Stampede programs and facilities.