The Calgary Stampede announces the winners of the Junior Steer Classic 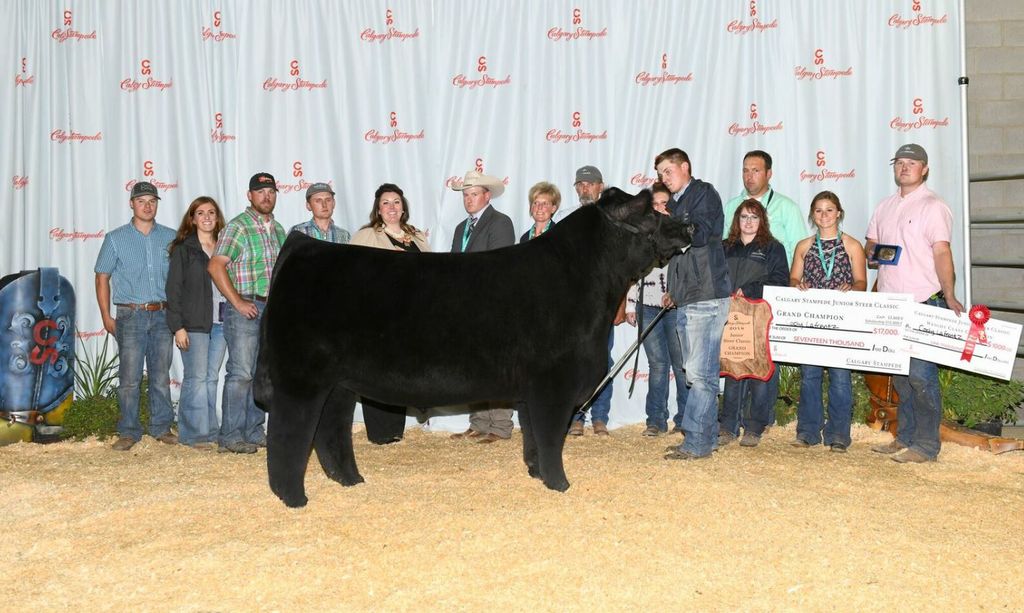 The Calgary Stampede announces the winners of the Junior Steer Classic

CALGARY — For 35 years, the Junior Steer Classic at the Calgary Stampede has been committed to developing the next generation of agriculture advocates. And it consistently puts its money where its mouth is: this year, approximately $73,000 in scholarships and prizes went to competitors aged nine to 21.

Cody Lafrentz had the biggest withdrawal from that figure for his Grand Champion title, taking home a $5,000 cash prize in addition to $12,000 towards scholarship. Lafrentz brought his club calf Lucky Strike (1,413 lb.) from his family’s farm in Bienfait, Saskatchewan, a trip he’s made before.

“This is my seventh time at Stampede. I’ve been using my scholarship money to attend Kansas State University and I have one more year left. I’ve been taking animal science with a business option,” Lafrentz said. “I’ll probably come back to the family operation and use my education there once I’m done.”

It was a bittersweet year for the 22-year-old, as he’s aged out of the competition.

“My involvement in the Steer Classic has kind of shaped me into the person I am. It’s a good program for kids to come out and show steers, especially when you have good judges who become mentors.”

Sixty-seven competitors in 10 classes showed at the Nutrien Western Event Centre on Sunday. The final round saw the top two steers from each class face off before judges Lance Leachman and Christie Gabel. Reserve Grand Champion Devon Scott of Arrowwood, Alberta was awarded a $3,000 cash prize and $8,000 in scholarship.

For many of the young exhibitors, the Junior Steer Classic is an annual event. Take Toby Noble, 19, who competed once again this year. He grew up on a farm east of Lloydminster, Saskatchewan where his family has 250 head of Simmental cattle. Noble started showing with 4-H when he was nine and “eventually, when we had steers that could compete at a higher level, we came to the Stampede.”

That was in 2012. In 2016, Noble and his club calf were named Reserve Grand Champion in the Junior Steer Classic. The win came with a cash prize of $3,000 and an $8,000 scholarship. The next month, Noble headed south of the border to attend Hutchinson Community College in Kansas.

“It was a big move. The scholarship money helped me to be able to do that. It was difficult at first. I only knew one person and I was put into a house with four roommates from all over,” Noble said. “I knew I had to do it out of high school or I would regret it. It was really nice to be exposed to different people and different cultures at college. I was also a member of the livestock judging panel at the college. I’ve met some of my best friends down there. I’m sure I will stay friends with them for the rest of my life.”

After graduating from a two-year program with a minor in Animal Science from Hutchinson this year, Noble returned to the family farm. He has opportunities to finish his degree elsewhere, but is focusing on the family cattle operation for now. And he spent time preparing his steer for this year’s Stampede, a special year for him as it’s the last one he will be sharing the experience with his older brother.

As Ryley Noble is turning 21, it was his last Stampede. Between the two of them, the siblings have earned approximately $26,500 in cash and scholarships. That figure includes the prizes the brothers won at this year’s Stampede. Both won their classes and made it to the final round, with Toby placing in the top six with his steer Jim, a 1,346-lb. club calf.

“We’ve always been a competitive family and I definitely like the drive the Junior Steer Classic brings out in all of us,” Noble said. “I’m passionate about the livestock industry and showing cattle and trying to get better year after year has always pushed me to work as hard as possible and be the best I can be.”

Visit ag.calgarystampede.com/results for full results from the Junior Steer Classic.