The Calgary Stampede shines in the hearts of Calgarians and the heart of the city.

On Thursday, May 2, 2013, at the Calgary Downtown Association’s (CDA) Annual General Meeting, the Stampede was generously handed the 2012 Downtown Vitality Award for Arts and Culture. 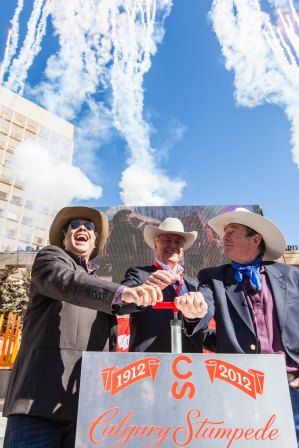 Stampede president and chairman of the board, Bob Thompson, accepted the Vitality Award in recognition of the “100 Days to Stampede” event which took place on Friday, March 29, 2012 at Olympic Plaza. Thousands of Calgarians attended the spirited 100-day kick-off party to get a sneak-peek of the Stampede’s Centennial celebrations, and were treated to live entertainment and Stampede-time goodies. The event was deemed a roaring success by organizers and spectators alike, and helped spawn excitement in the days leading up to the Centennial of The Greatest Outdoor Show on Earth. In fact, with more than 1.4 million guests, 2012 turned out to be a record-breaking year at the 10-day Stampede.

The award show itself, put a grand spotlight on our city centre and those that make it a great place to work, live and play. The Vitality Awards are given annually to businesses and organizations in recognition of significant achievements in enhancing the vitality of downtown Calgary. These businesses and organizations help to meet the CDA’s mission to champion a vital, prosperous, attractive and livable downtown community for everyone to enjoy.

The CDA felt compelled to recognize the Stampede for continually bringing Calgarians together. It only seemed right that the Centennial celebrations, which touched every part of Calgary, should start in the heart of the city.

The categories change year-to-year depending on what is occurring downtown, however there are eight main categories: Social and Safety, Arts and Culture, Community Integration and Vibrancy, +15 Vitality, Streetscape Improvement/Environmental, Community Partnerships, Urban Design and Business Development. You can view the full list of award winners here.

The Calgary Stampede is honoured to accept this award from the CDA and wishes to thank everyone who voted.