The Calgary Stampede wrangles space cowboy to be 2013 Parade Marshal

The Calgary Stampede wrangles space cowboy to be 2013 Parade Marshal

The Calgary Stampede is thrilled to announce the 2013 Parade Marshal, Chris Hadfield, the first Canadian to command the International Space Station (ISS). For the first time in the Stampede’s history, our invitation went out to our Parade Marshal over Twitter. The conversation culminated with the Calgary Stampede president Bob Thompson issuing a formal invitation on YouTube.
[photo credit: Canadian Space Agency] 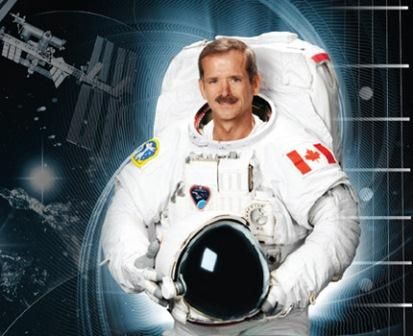 "As you circle over Calgary," he said, "take a look out the window...picture the festival and party that will be going on there and think that you will be our honourary Parade Marshal."

A fitting invitation for the man Forbes called “the most social media savvy astronaut to ever leave Earth.” When Commander Hadfield left Earth five months ago, he had 20,000 Twitter followers; he and his son Evan, 28, (also his social media manager) have grown that number to 925,000 and counting. His 81 YouTube videos—on everything from clipping nails to how zero gravity affects the five senses—have generated more than 20 million views. Hadfield tweeted daily photos, dropped a ceremonial puck for the Toronto Maple Leafs,spoke with William Shatner and students all over the world, and ‘filled the sky with music’ with Barenaked Ladies’ Ed Robertson for Music Monday, a cross-Canada sing-a-long.

And just when we thought he couldn’t get any cooler, he released his swan song: the viral "Space Oddity" video that captured the beauty and wonder that Hadfield has reminded us of over the past five months. Hadfield’s creativity, warmth and generosity have reinvigorated the world’s curiosity and excitement about space exploration and our planet.

Raised on a corn farm in southern Ontario, Hadfield dreamed about flying from an early age. He won a glider pilot scholarship at age 15. After Royal Military College, Hadfield served for 25 years in the military. During that time, he was one of four new Canadian astronauts selected from a pool of 5,300 applicants. He has flown more than 70 different types of aircraft, commanded NEEMO 14 on a NASA undersea mission to test space exploration concepts under water, and became the first Canadian to float freely in space. Commander Hadfield has been commemorated on Royal Canadian Mint coins, inducted into the Aviation Hall of Fame and recognized with more awards and honours than could be listed here.

In the words of Calgary Stampede president Bob Thompson, Commander Chris Hadfield is “truly a Canadian icon. A Canadian hero.” We couldn’t be more honoured to have him join us for the 2013 Calgary Stampede!