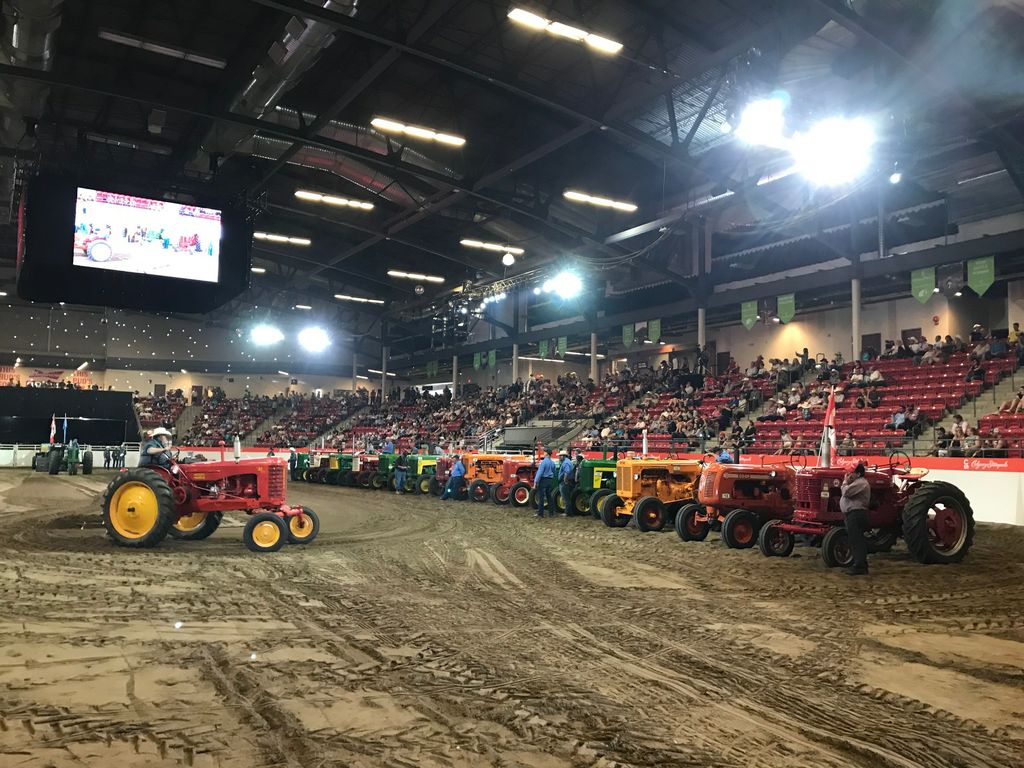 CALGARY — Watching the action unfold at the Vintage Tractor Pull Sunday night, competitor Stan Veer came up with a strategy. Then, he had to hold his breath and hope no one else put the same plan into play.

When it was Veer’s turn to drive his 1959 John Deere 830 Electric, the retired farmer took the path much less travelled and piloted his tractor to the far right of the dirt-covered arena floor at the Nutrien Event Centre, rather than the centre.

Taking a page from Veer’s playbook, three of his fellow Class 5 drivers took the same route to the right, but couldn’t match his pull of approximately 160 feet. In the end, Veer took the class with a total of 272 feet over two pulls. It’s the first win at the Stampede for the Calgarian, who’s been taking part in tractor pulls for 15 years.

Veer’s always loved John Deere tractors, but his family didn’t have any when he was growing up on a grain farm near Irma, Alta. When Veer had the time and money, he started buying vintage Deeres, restoring them and taking part in tractor pulls.

“I’m competitive, so I enjoy that. And we often take the trailer out to two-day pulls. We say, ‘What else are we going to do on a weekend?’ We take the grandchildren and it’s like a holiday,” Veer said.

Driving machines manufactured in 1960 or earlier, the 29 competitors in the Calgary Stampede Vintage Tractor Pull drew upon their considerable skills to demonstrate the weighted-sled-pulling power of their restored vehicles. Aggregates scores over two pulls (held for the first time over two days) determined the winners in the six weight classes at the invitational event.

And here’s the thing about vintage tractors: just like eating a piping hot mini doughnut, it’s hard to stop at just one. Veer has eight or nine tractors (some of which are used for parts) on a farm in Cremona. His fellow Class 5 competitor Gordan Farr has four: three 660 International Harvesters and a WD-9, which was built by the same company. Farr, who’s been competing in tractor pulls for more than four decades, traced his affinity for the 660 to his childhood

Farr operated a dairy farm west of Didsbury, Alta. until 2009. When he went to enter a vintage tractor pull back in the 1970s, though, there were no 660s to be found. He eventually tracked down two in Saskatchewan and one in Okotoks.

“My wife bought the one I’m bringing to Stampede for my birthday, my 60th,” Farr said. “I’ve got a 75th birthday coming up, but I don’t think I’ll be getting the one I really want. It’s an International 460, but I can’t find it anywhere. We had one all lined up, but it fell through.”

Not only is it getting harder to find vintage tractors, he said, sourcing the parts needed to keep them running is a challenge, too. Farr enjoys restoring the tractors, but it can be a tough go finding the parts to accomplish the labour of love. It took him six attempts to find a cylinder head that wasn’t cracked for his 660.

“I just enjoy it. I’m only going to about four pulls a year now, but I still have a good time,” said Farr, a longtime competitor at the Calgary Stampede.

Other results from Sunday’s final were:

For the full results from the Vintage Tractor Pull, visit ag.calgarystampede.com/results.