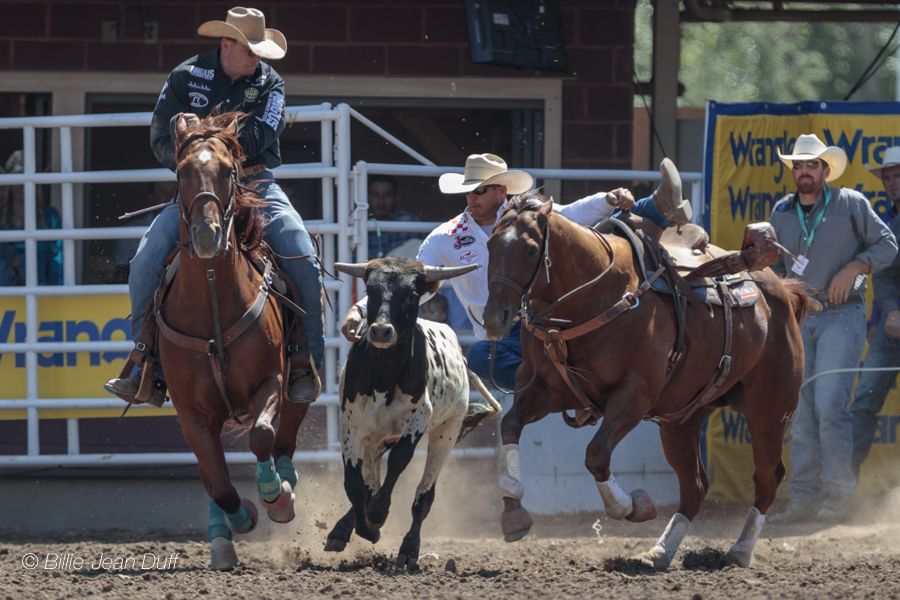 The rich got richer on Day Seven of the Calgary Stampede Rodeo, but it was also a breakthrough day for a couple of Pool B contestants. Trevor Knowles has claimed the $100,000 Calgary Stampede steer wrestling prize four times in his career, but he had failed to score a cheque in the first two rounds of his 2018 effort. That changed when the Oregon cowboy got his steer tipped over in 3.7 seconds Thursday, the fastest time in Pool B so far. He broke the ice with a $5500 cheque.

Knowles was a late add to the contestant list when Canadian champion Jason Thomas, who had been trying a comeback from a badly broken arm, decided it was just not ready.

“I didn’t get the call to come here till Friday. I hauled butt to get home and get my passport, packed a bag and drove up.” Dakota Eldridge placed in the round, so he’s the overall Pool B leader, with $11,000, followed by Matt Reeves with $9000. Knowles isn’t in the top four…. yet.

Things have been going just right at Calgary for Ryder Wright. Just a day after treating saddle bronc riding fans to a stellar 92 point ride, the young Utah sensation came back and tapped out 90 points on the new Vold horse Rise and Shine.

“It’s been a good three days so far,” he smiled. “Hopefully we can keep it rolling on Sunday.” Last year on championship Sunday at the Stampede, Wright’s daughter was born, and he had to Facetime to be part of the big family moment. This year, both his wife Cheyenne, and little Bexley are here with him in Calgary. Wright has the Pool B lead with $14,500, with his brother Rusty Wright in next at $9000.

The ‘six seconds or bust’ tie-down roping continued on Day Seven but this time Blane Cox was the only cowboy to break the seven second barrier. He took home the lion’s share of the cash with a time of 6.7 seconds.

“This is actually the fastest I’ve ever been. I’ve been 6.8 one time in Texas, but this is the fastest. It’s very exciting for me,” said Cox. The win moves him into second place in the Pool B standings with a $9500 total. Oklahoma’s Ryan Jarrett is the frontrunner with $12,000.

Make it two in a row for barrel racer Hailey Kinsel of Texas, as she and Sister sped around the pattern in the fastest time of this year’s rodeo so far, 17.11 seconds.

“It was a little better run. I had a better first barrel so I think that made me a little bit quicker. She was good today,” said Kinsel. Her cash count is up to $15,500 at the top of the heap, but B.C.’s Carman Pozzobon is keeping in the hunt, placing again, and pushing her tally to $11,500 in second place.

Brazilian Ramon De Lima got his first trip to the Stampede award stage after staying on the middle on a spinning bull called Bamf, for 88.5 points.

Also, the Stampede rodeo office confirms it’s heard from tie-down roper Cade Swor. He qualified for Sunday’s Showdown, but broke an arm while competing in Sheridan and had to pass up his opportunity in Calgary. Al Bouchard gets the nod instead to advance from Pool A.

Popular Strathmore bull rider Scott Schiffner announced he and his family have decided this will be his last Calgary Stampede. He plans to hang up the bull rope after competing at a few more shows, after an impressive twenty-year career. He’ll be competing in Wild Card Saturday.