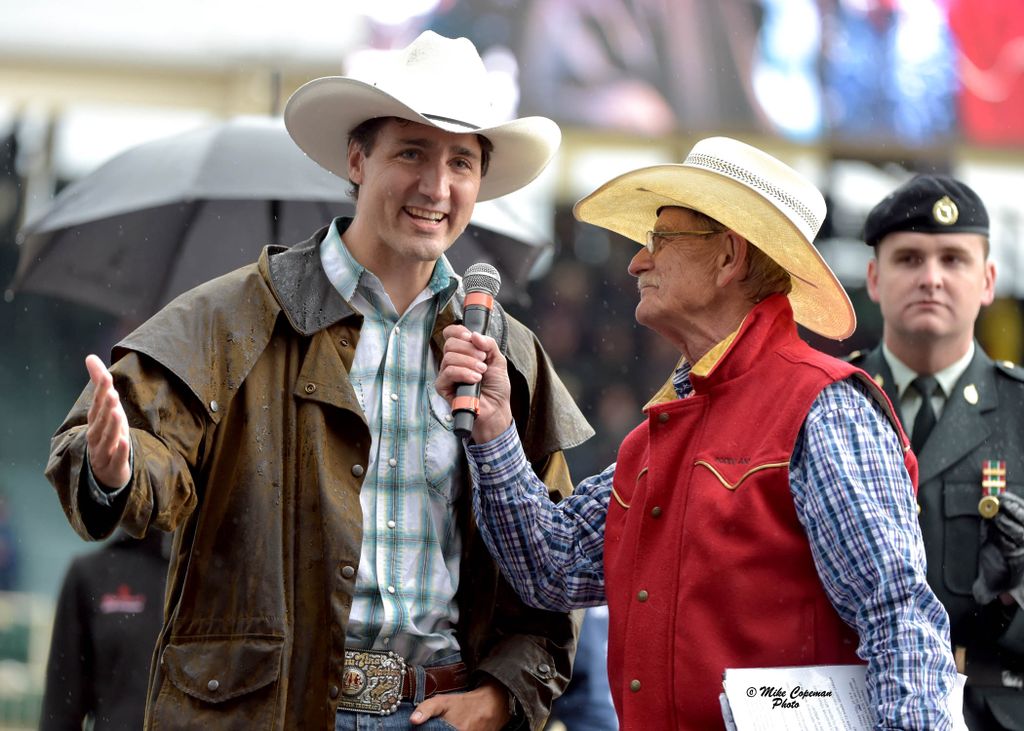 There’s nothing like a little moisture and mud to test cowboy determination, for rodeo contestants and even the visiting Prime Minister. Friday was the last chance for Pool B contestants to guarantee themselves a trip to the Calgary Stampede Showdown Sunday by being one of the four highest money earners in their event.

The fan favorite event on a muddy day is always the steer wrestling. But it was money rather than mud that was on the mind of Cody Cassidy, and he needed a lot of it in order to avoid Wildcard Saturday.

The Donalda cowboy improved his chances when he won the round in 3.9 seconds. But the $5500 still left him $500 short of a top four position.

“I actually made it through last year, last day when I won the round and bumped Hunter Cure out by $500, so it can go either way,” said Cassidy. “I’m just glad to win some money. That’s everybody’s focus when they come here.”

“I’ve got one option tomorrow, and that’s to finish first or second. So that’s the plan!”

Ryan Jarrett knew what he needed to do, mud or not. The Oklahoma tie-down roper tied his calf in 7.2 seconds. The $5500 helped him nab the last of the four spots from his Pool. Finishing first was the ageless Fred Whitfield with his $12,500 total, followed by Cory Solomon ($11,000), Jarrett, and Marty Yates, who both earned $8500.

It was just the birthday present Alberta’s Zeke Thurston wanted. Although he had $7000 in his Pool B account, Thurston wanted some insurance to get a day off before defending his title. After his first horse didn’t like bucking in the mud, the Big Valley cowboy was offered a re-ride. This time, he teamed up with Major Cover, and the result was an 84 score, good enough to tie Jake Wright for first and sew up a spot for Sunday, on the day he turned 22.

They’ve been pushing the numbers higher every day in the bull riding, and Friday hit a new level, when Australian Josh Birks blew out a 90 point performance on a bull called Bomb Shell.

Birks is loving every minute of his very first Stampede, riding three of his four bulls and earning $14,500.

“Words can’t describe it. It’s a dream come true,” he said with a grin. “I’ve grown up watching this every year, and always said I’d be here. I never really believed it, actually, but now I’m here, I’ve got to believe it!”

“Yesterday I had like, a hundred messages on my phone, so they’re all watching back home. There’s a little bit of pressure there. I think that’s what’s keeping me hanging on.”

Lisa Lockhart proved she can handle all kinds of conditions, and even though she gave her horse Louie a break, she still tied for first on her final Pool B run with Cayla Melby of Oklahoma. Both made 18.18 second runs. Lockhart collected a whopping $20,000 for her week, but she’ll be joined on Sunday by Alberta’s Nancy Csabay ($13,000), Michele McLeod ($8500) and Jackie Ganter ($8000)

There’s another pot of money available on Wildcard Saturday for the rest of the contestants to take a run at, but only the two best scores or times from each event will get a chance to join the Pool A and B finalists for the Sunday’s richest afternoon in rodeo, at the Calgary Stampede.

There was a champion determined Friday, when 14-year-old Mason Spain claimed the Tier One Junior Steer Riding Championship, with a pair of rides totaling 151 points.

Spain enjoyed his moment on the Stampede stage.

“That was very cool, standing in front of all those people. A little bit nerve wracking, but really fun. I told them when I get a little older I want to come back and win the hundred thousand!”