Wow! Never thought you’d see the likes of KISS, opera’s high notes and hip-hop-R&B-Bollywood beats on the same stage? Well, the TransAlta Grandstand Show is going to shatter your expectations. 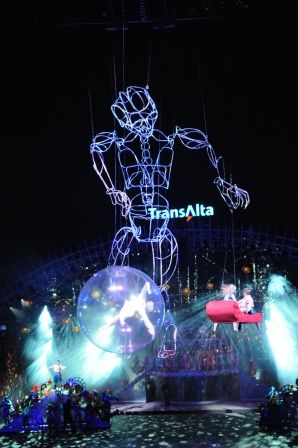 On Tuesday, April 9, the Stampede previewed the cultural, musical and entertainment mash-up that is this year’s Grandstand Show for local media.

The preview opened with nine-year-old Young Canadian of the Calgary Stampede Zoe Lukowich singing Rolling in the Deep in front of a ring of fire.

We saw images of two Chinese groups that will join the fray: Flag Circus and Pole on Globes. Picture, (if you can) ballet dancers and aerial acrobatic performers mounted on rolling globes. The Calgary Stampede will be Pole on Globes’ first performance in North America.

In a truly breathtaking performance, the Calgary Philharmonic Orchestra’s violinist Donovan Seidle joined First Nations dancer Dallas Arcand. The duo brought together unexpected contrasts—one wore a gray suit, the other red, yellow, blue and green traditional dress; one carried a violin, the other five orange hoops; the First Nations dance unfolded to the pop song Rolling in the Deep played on a classical instrument. The result was something new and unforgettable.

And there’s so much more: a nine-year-old in a tux crooning Fly Me to the Moon, Alberta Ballet dancing to Sir Elton John, Juno nominated Raghav, Destroyer—the KISS tribute band, AND Marc Martel, a dead ringer for Freddie Mercury in looks and voice.

So get ready to rock and roll all night (and party every day).

This year’s Grandstand Show runs each evening during the Calgary Stampede July 5-14.