The University of Calgary and the Calgary Stampede

The University of Calgary and the Calgary Stampede 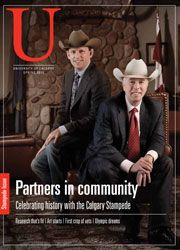 This month, the University of Calgary has honoured the many ways that both institutions are connected to each other and to the community. From University of Calgary researchers studying the history, culture and social impact of The Greatest Outdoor Show on Earth, teaching engineering and physics by riding the rollarcoasters on the Midway, to volunteer vets committed to rodeo animal welfare – the list is endless.

The University of Calgary's flagship publication, U magazine (Spring issue), has featured articles on the many alumni who support the Stampede in various roles in the organization.

Featured on the cover of the magazine are chief executive officer, Vern Kimball, BA’81 and MBA’90, and chief financial officer, Paul Harrison, BComm’96 and MBA’06.

The University of Calgary also honoured Vern Kimball by awarding him with the 2012 Distinguished Alumni Award on May 31. Vern also gave the convocation speech to The Schulich School of Engineering graduating classes

Calgary - Get ready to turn up those dials on your radio! The Calgary Stampede Bell Grandstand Show is back with a new and reimagined show for 2022. Titled AMPLIFIED, the show will feature a vibrant ...