Calgary – Proving that the GMC Rangeland Derby Canvas Auction is still one of the best investments in Calgary, bidders laid down a whopping $3,605,000 at this year’s auction, held at the Boyce Theatre on Stampede Park. Over 150 registered bidders took the time to express their confidence in the economy of Calgary and southern Alberta. 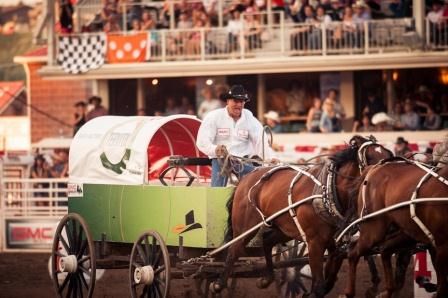 Again this year, “The King”, Kelly Sutherland proved to be the favourite choice amongst the 36 drivers, garnering a bid of $200,000 from Tervita Corporation, the same organization who backed Sutherland last year. The second place driver in the auction, Colt Cosgrave, went for a healthy $170,000. Tervita remained active in the auction picking up a second driver, Devin Mitsuing, for a respectable $95,000.

“Right from the start we were confident we’d break the $3 million dollar mark and we shattered it,” said Mark Damm, chair of the Chuckwagon committee. “It’s the third highest canvas auction is history, and we’re ecstatic.”