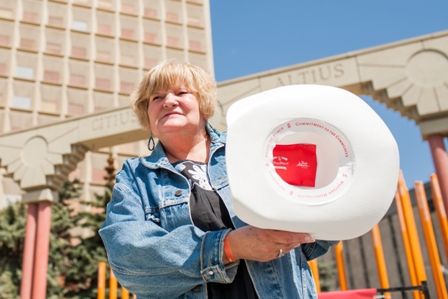 The Calgary Stampede, Tourism Calgary and Travel Alberta hosted these public White Hat Drops in three Canadian cities at 12:30 p.m. local time today. Two hundred white hats were placed at Olympic Plaza in Calgary and Young and Dundas Square in Toronto and 150 white hats lined the steps of the Vancouver Art Museum, one hat in each location contained a red envelope. At 11:30 a.m. local time, wristbands were handed out in each city for the corresponding number of hats.  Participants were let into the roped off hat area in small groups and given 30 seconds to decide which hat they wanted to stand behind. Once everyone had chosen a hat, they simultaneously lifted their chosen hat to discover if they had won.

This year, the Calgary Stampede celebrates the 100th anniversary of the very first Stampede. Events such as the White Hat Drop are a part of the many Centennial celebration events held to create excitement and share Calgary’s energy with Canada and the world.

The Calgary Stampede is from July 6–15, 2012.  For more information, please visit calgarystampede.com.