It’s long been considered a bell-weather of the Calgary and Alberta economy and this year’s GMC Rangeland Derby Canvas Auction has soared to new heights. At this evening’s auction, confidence in the economy and the excitement surrounding the Calgary Stampede’s Centennial lead to three new records including an incredible record total of $4,015,000 – topping the previous record of $4,003,000 set in 2007. 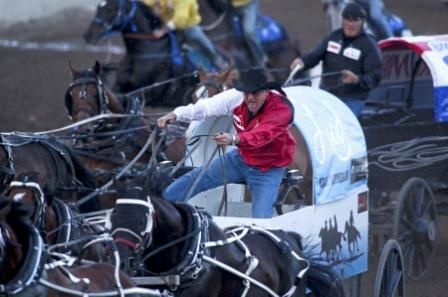 The second record was shattered when driver Kelly Sutherland, better known as The King, garnered an amazing bid of $300,000 from Tervita Corporation, a total that far eclipsed the previous record of $210,000 that Sutherland earned in 2008. “This has truly been an amazing day for the Calgary Stampede,” said Mike Casey, president and chairman of the board, Calgary Stampede. “With the outstanding kickoff for the 100 day countdown earlier today, and now a record setting GMC Rangeland Derby Canvas auction, we are truly humbled by the ongoing support and confidence shown by Calgarians and Albertans alike.”

The second highest bids of the night went to drivers Gary Gorst and Buddy Bensmiller, who each captured bids of $150,000. The third record was set for the highest average bid for all 36 drivers. This year’s average bid was $111,528, breaking the previous average of $111,208 set in 2007.