CALGARY – Justin Gattey is a long, long way from Wall Street. But when Gattey starts work in the morning, he knows he’s not selling cows . . . he’s selling commodities.

“Livestock is a market, and it changes daily – prices and factors and trends,” says the auctioneer from Consort, Alta., who’s been a professional motormouth since 2005. “There’s a lot of thinking involved . . . a lot of different factors that make it interesting, and keep you on your toes. 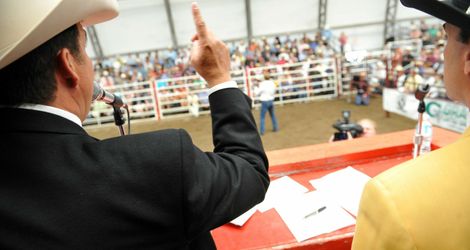 “You have to follow the market, know what’s going on that day, keep up with the big picture. And I push myself to be better every time out there.”

Gattey, 27, is one of 10 finalists who’ll warm up their vocal cords during the Calgary Stampede’s 24th annual International Livestock Auctioneer Championship on Saturday, July 14 at 11 a.m. under the Big Top. This year’s showdown began Friday morning with the preliminary round at the Olds Auction Market in Olds, Alta., where all 24 hopefuls – hailing from as far away as California, Wisconsin, Kentucky, Illinois, and Australia – auctioned off seven drafts of cattle.

The winner receives a cheque for $5,000, a custom-designed Stampede buckle, and a champion’s jacket sponsored by former event winners – as well as an automatic berth into the 2013 World Livestock Auctioneer Championship at Montgomery, Ala. The runner-up collects $1,000, third place takes $600, fourth place is worth $400, and the top rookie will take home a Stampede buckle.

Gattey is taking his fourth run at the Stampede auctioneers’ crown, considered one of the most prestigious in the industry. A graduate of the Western College of Auctioneers in Billings, Mont., Gattey primarily sells livestock, as well as heavy equipment and farm equipment, at Vold, Jones and Vold Auction in Ponoka, Alta., and the Viking Auction Mart in Viking, Alta.

He enters the International Livestock Auctioneer Championship on a roll, having won the Canadian championship last month at Stavely, Alta.

Auctioneering runs in the family for Gattey; his grandfather Frank Gattey plied his trade in the Provost and Cereal area of east-central Alberta.

“We’re working for the producer. They have faith in us; they put their cattle in front of us to bring the best price possible,” says Gattey. “For a lot of producers, that’s their livelihood. That’s their income for the year. They rely on us to do the proper job on their behalf.”

Saturday’s 10 finalists will auction off four drafts of cattle, as part of the Stampede’s annual Brand Consignment Sale, plus one Black Box item. They’ll be rated by a panel of judges – Barry Bieleny of Killam, Alta., Jerry Etheredge of Selma, Ala., Michael Fleury of Aberdeen, Sask., Brian Little of Wann, Okla., and Ed Read of Lethbridge, Alta. – who’ll be looking for rhythm, clarity, voice control and intonation, appearance, mannerisms, deportment, repartee and timing, and livestock knowledge, as well as their ability to spot bids and conduct a sale.

“It’s all about clarity, about establishing a nice, easy rhythm,” says Greg Sanderson, who chairs the Stampede’s International Livestock Auctioneers committee. “And knowing the value of what you’re selling is key.”

The Black Box factor was added to the International Livestock Auctioneer Championship in recent years as a way of engaging the public, and throwing auctioneers a proverbial curveball by testing their professional dexterity. This year’s Black Box items include golf packages and cuts of meat.

The Stampede’s auctioneer showdown is considered a one-and-done affair. While there are no rules technically restricting former winners from throwing their hats in the ring, the practice is actively discouraged. “If you win, you can compete again a few years down the road,” notes Sanderson, “but after you’re the best, do you want to come back and finish in fifth place?”

The grand champion and reserve champion pens of steers and heifers from the Canadian Feeder Cattle Show and Sale will be transported to Calgary and sold under the Big Top on Saturday by competition finalists.